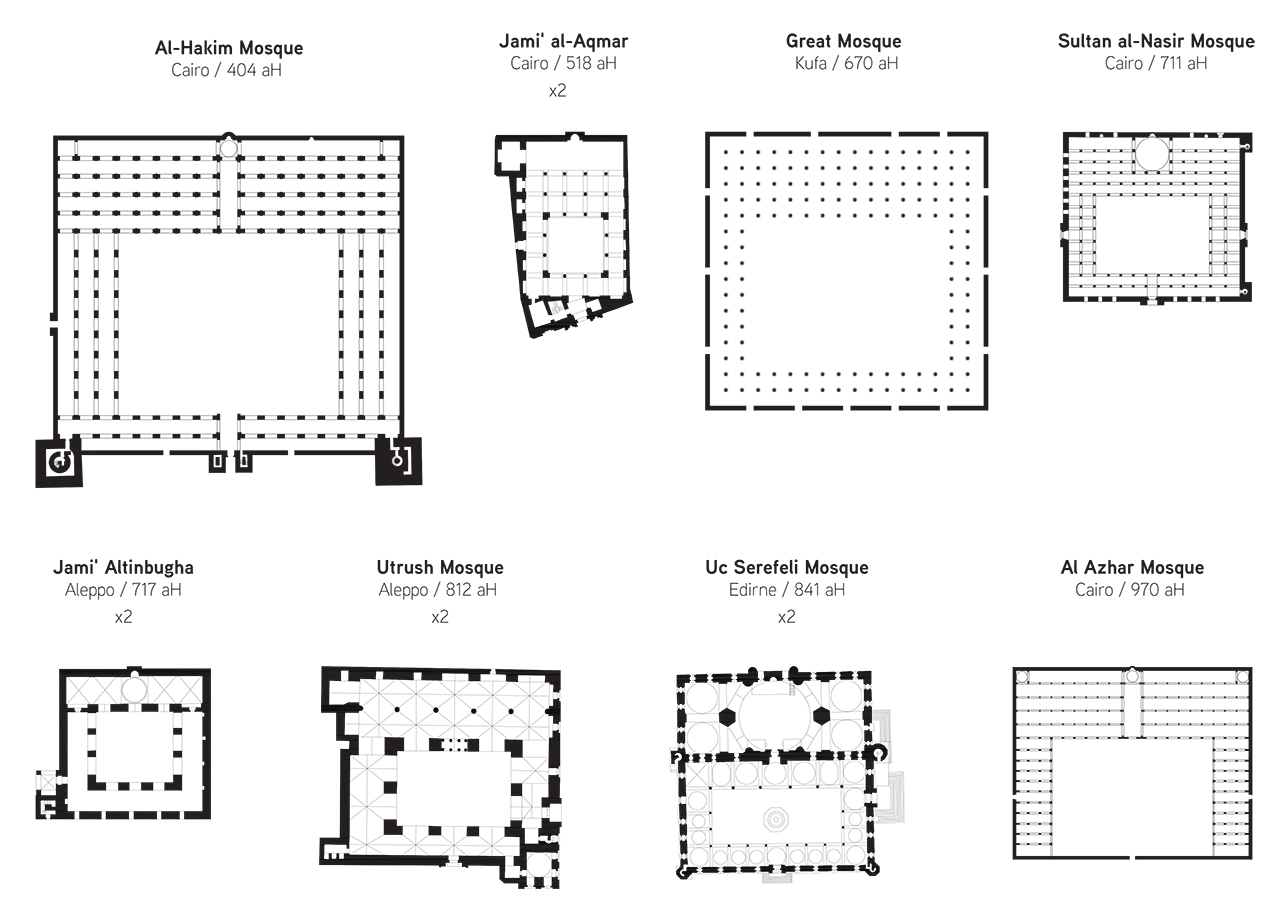 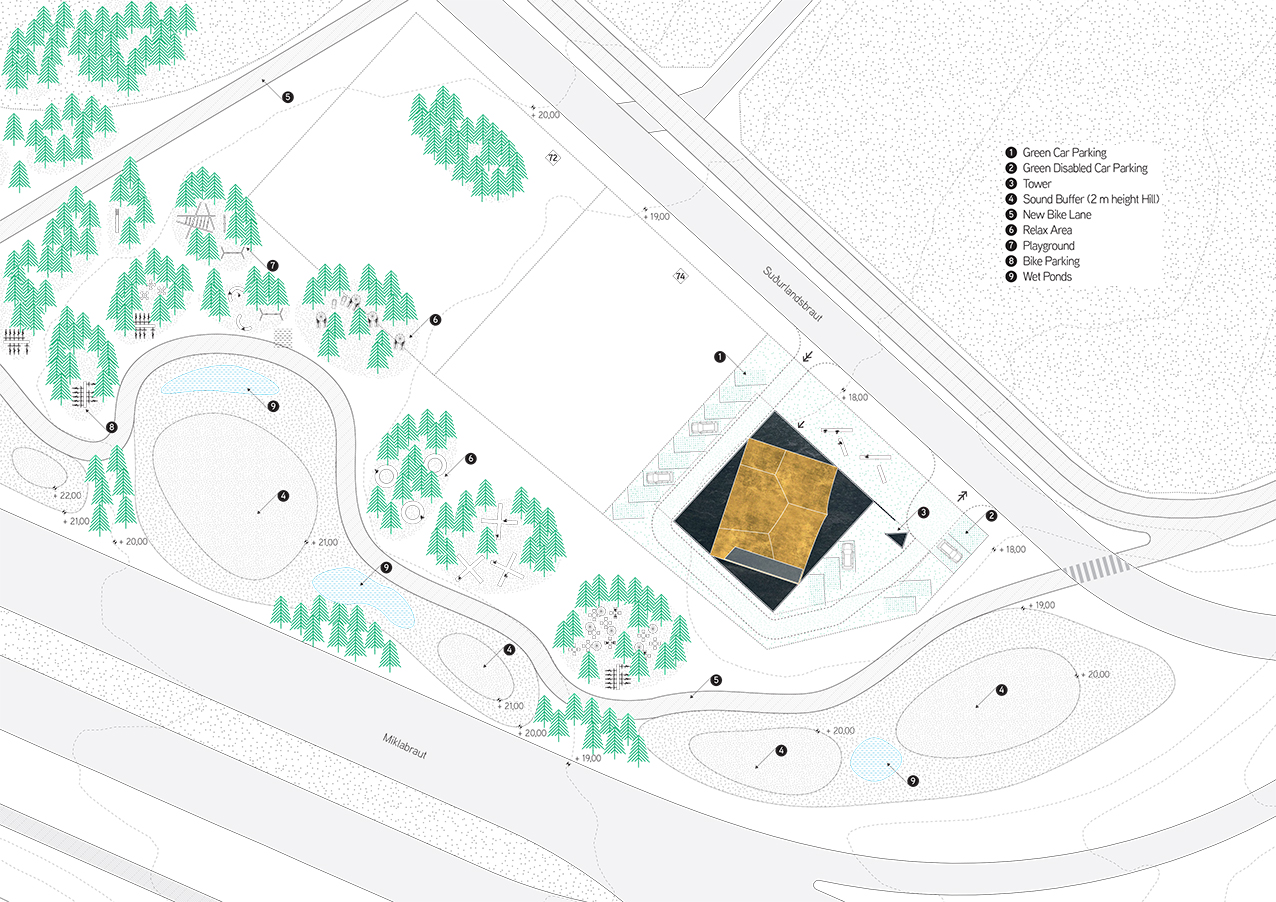 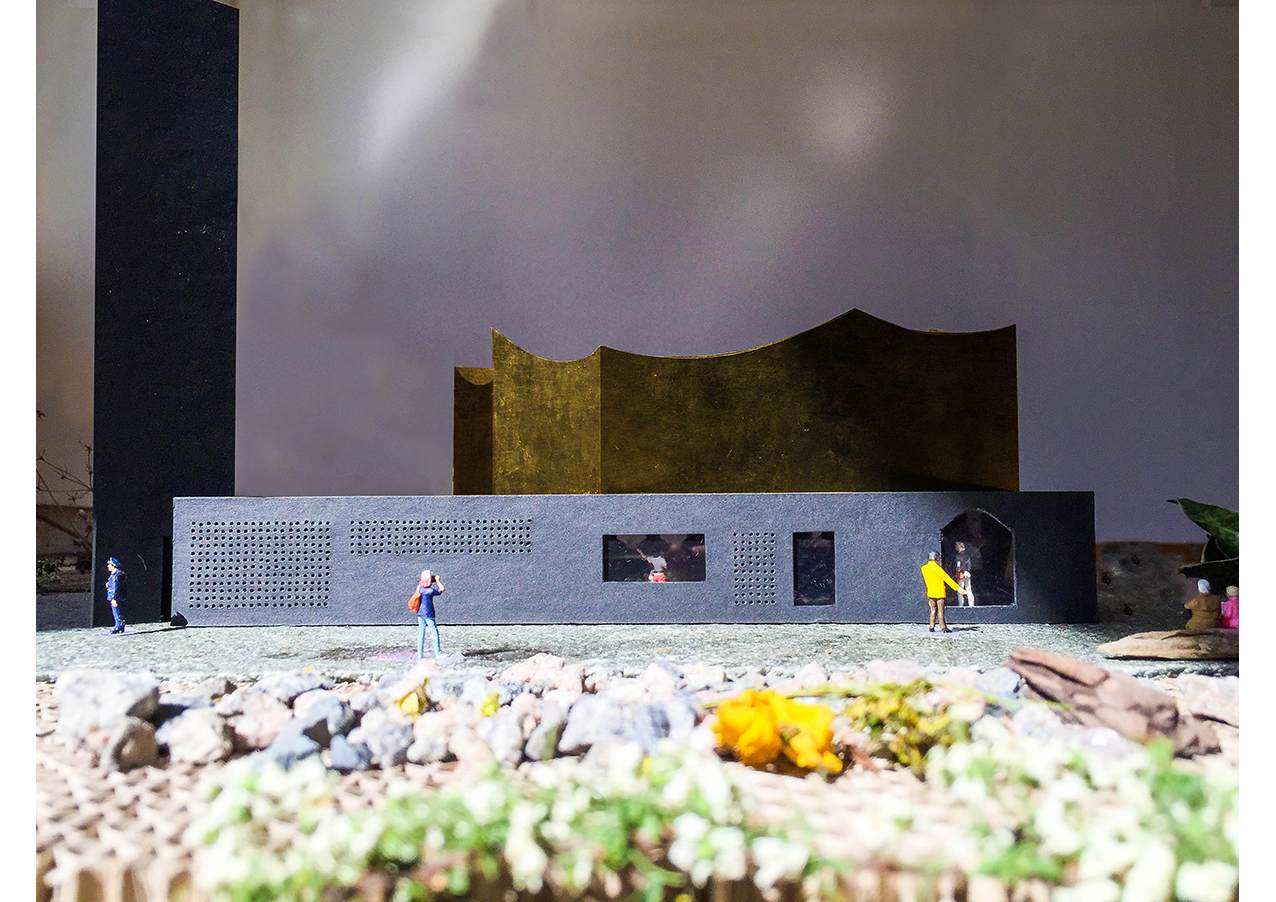 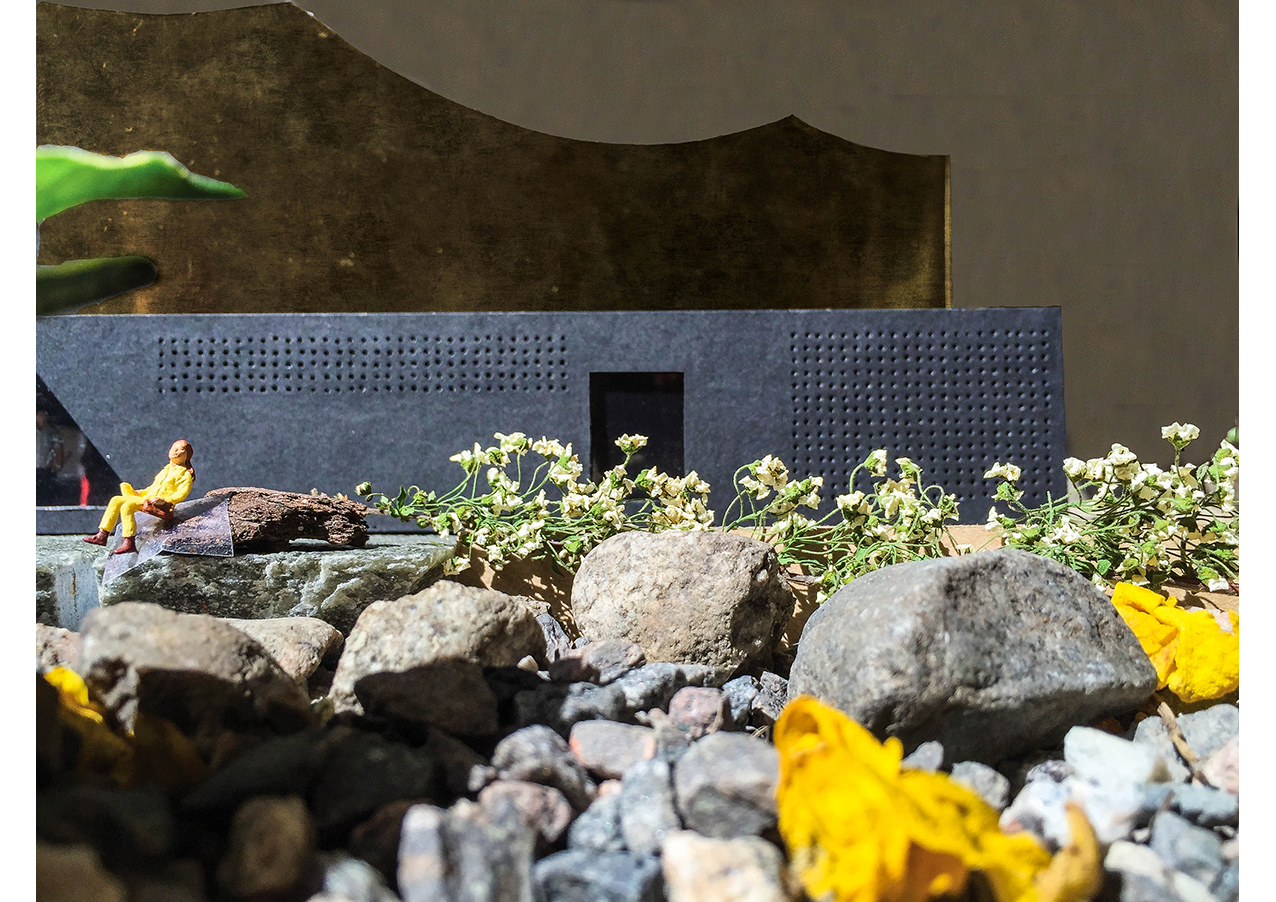 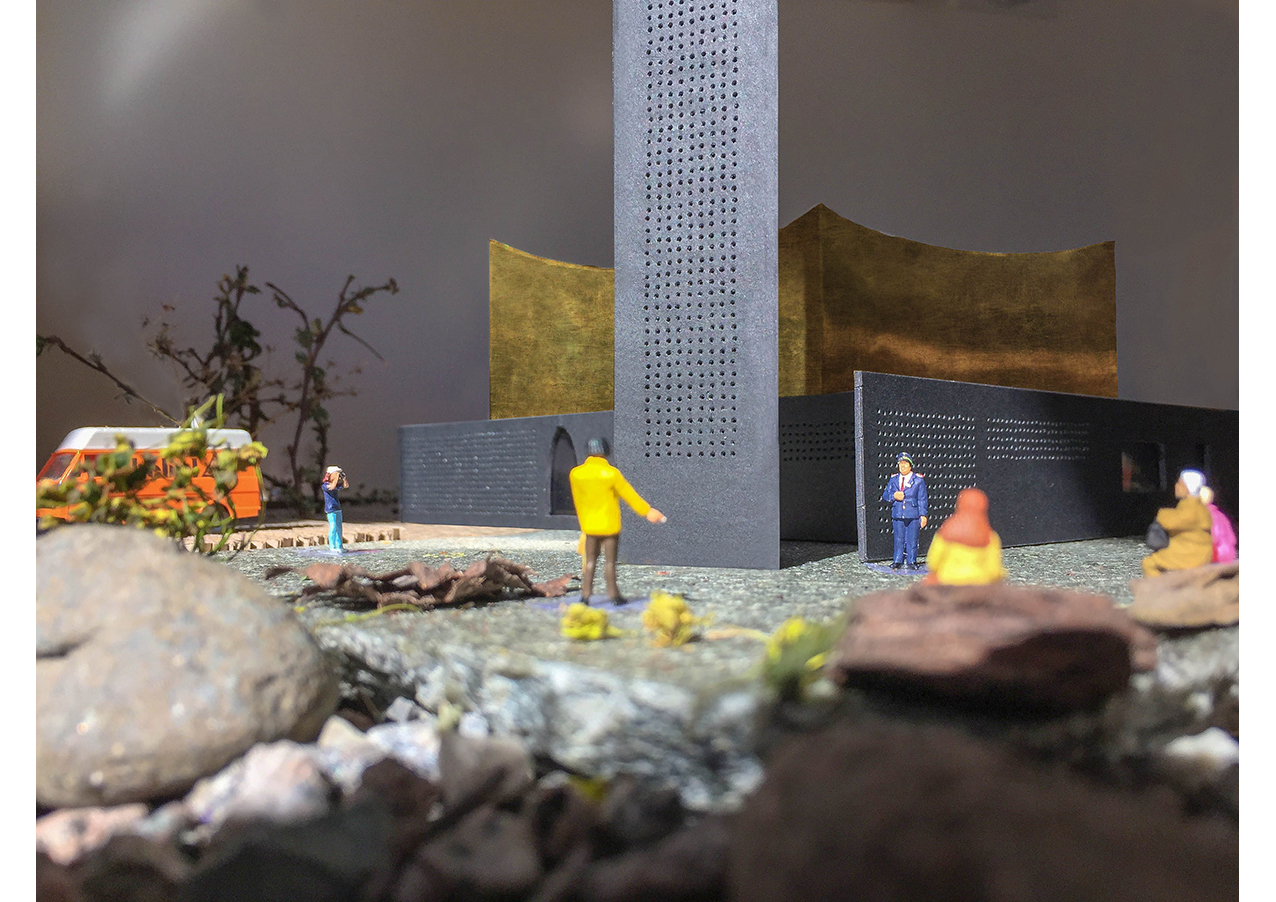 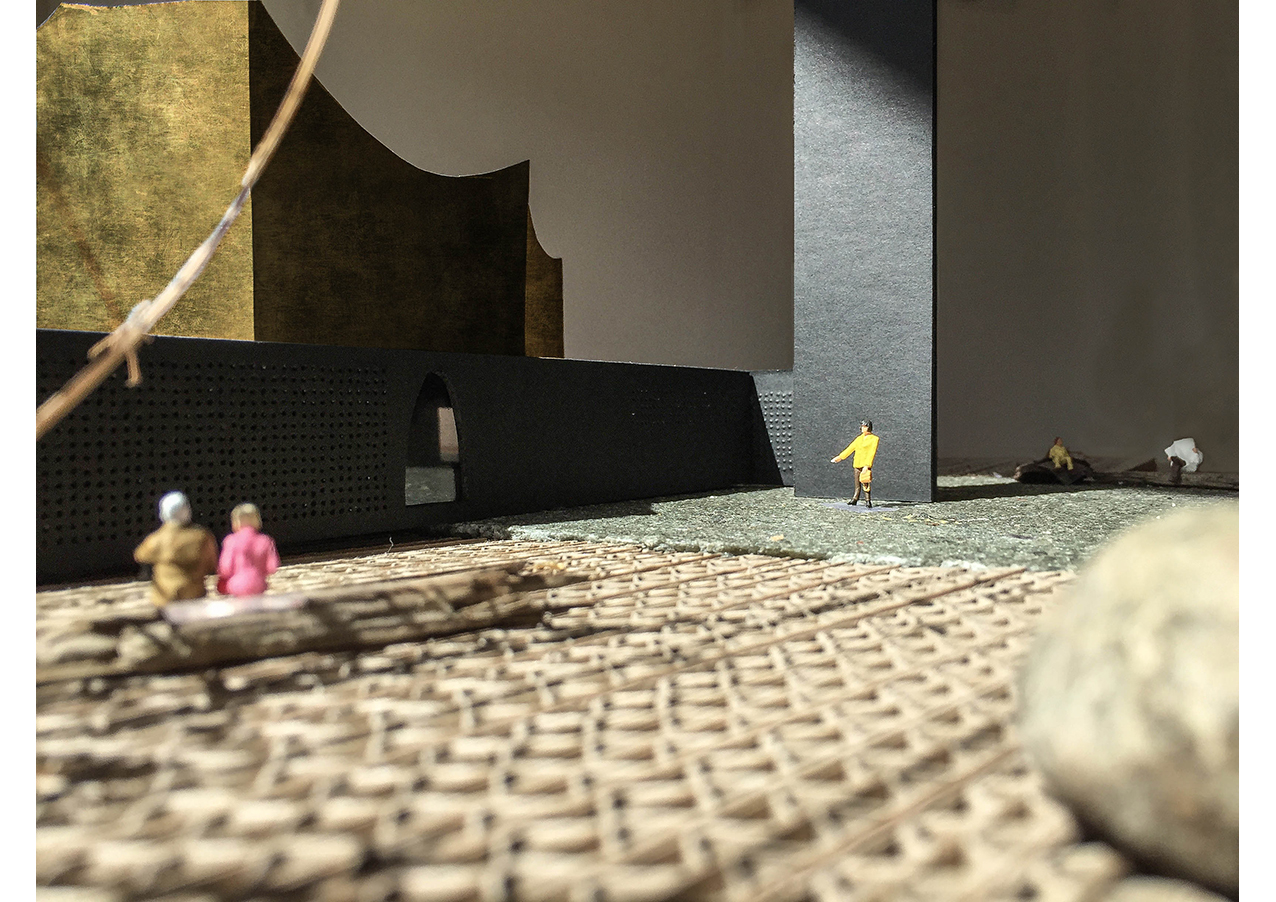 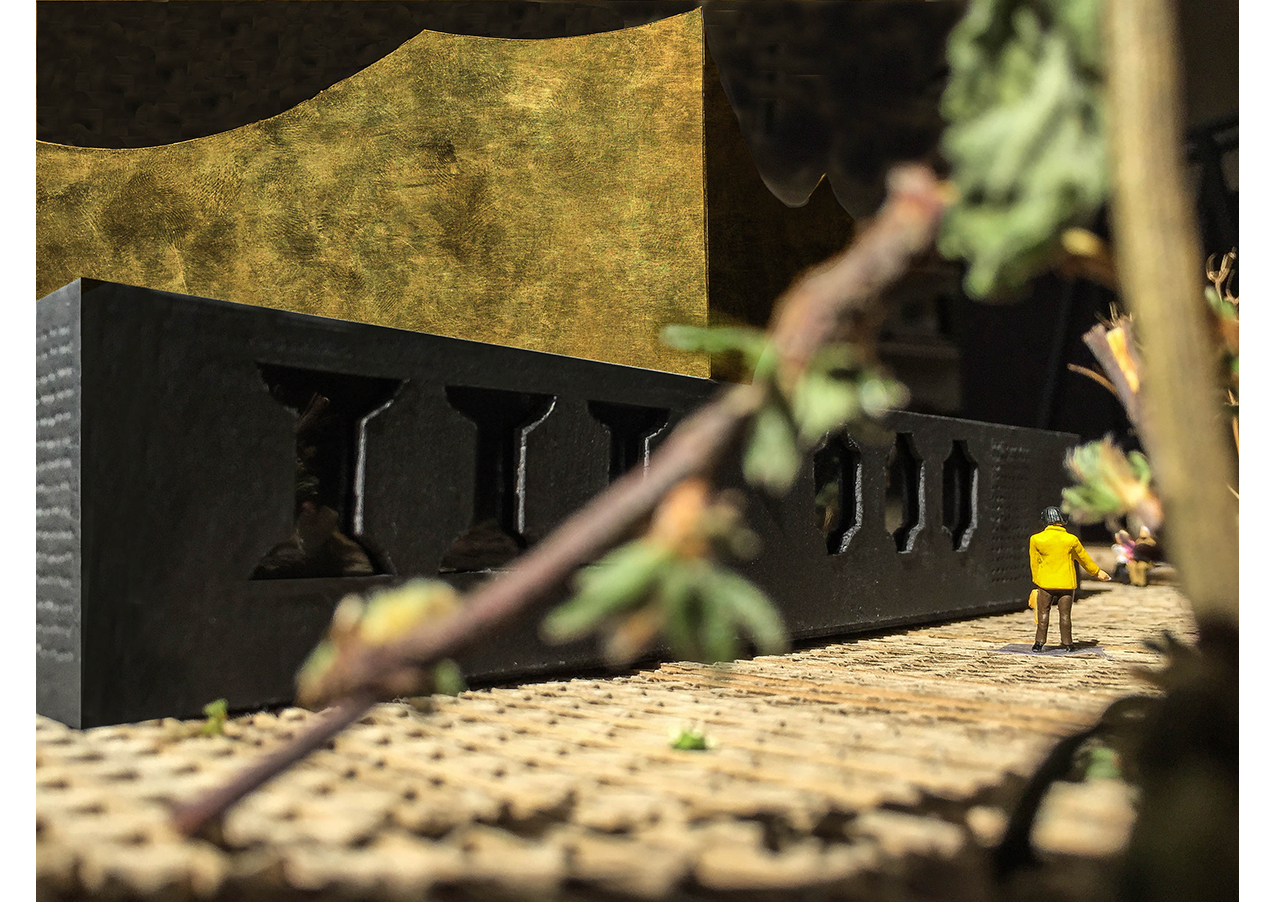 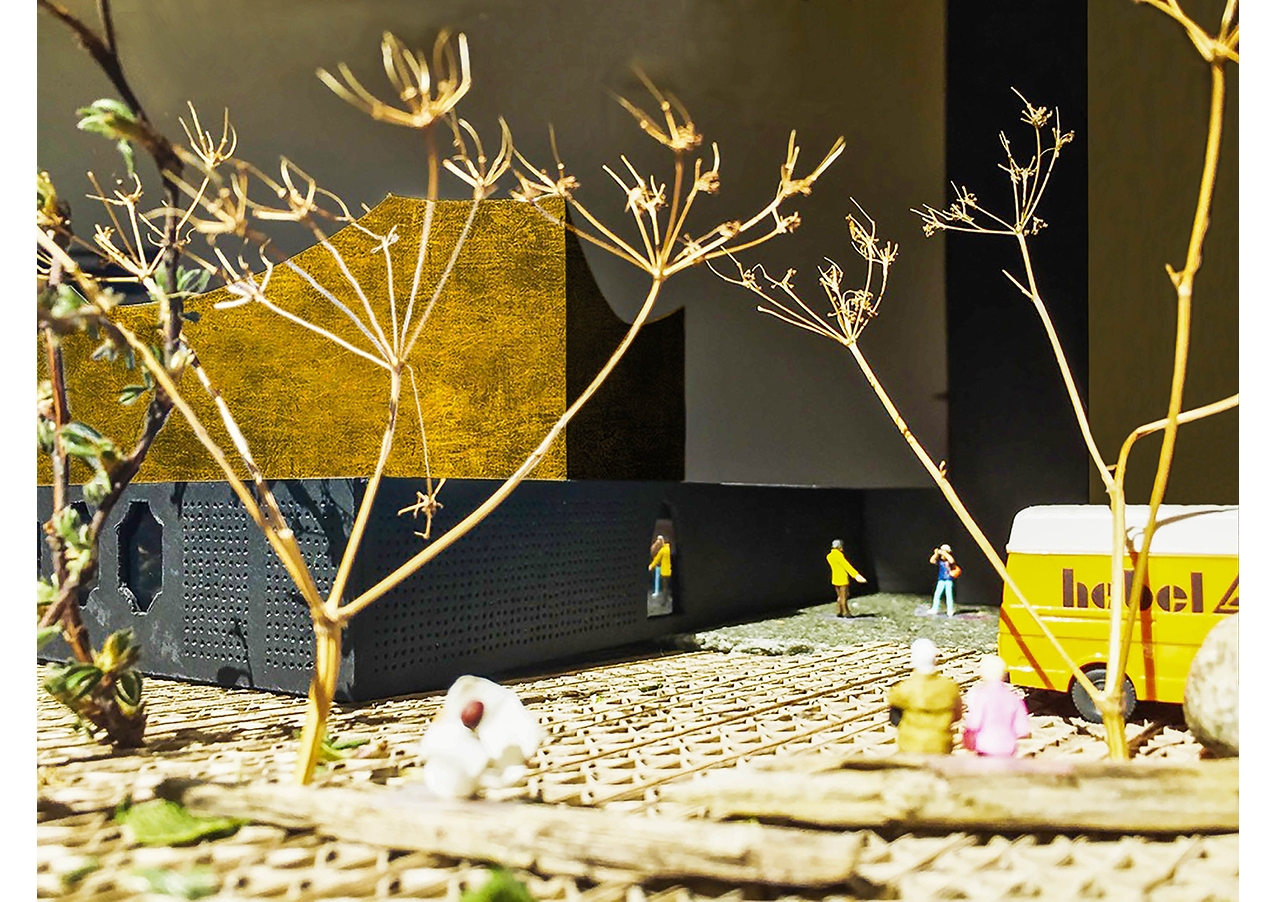 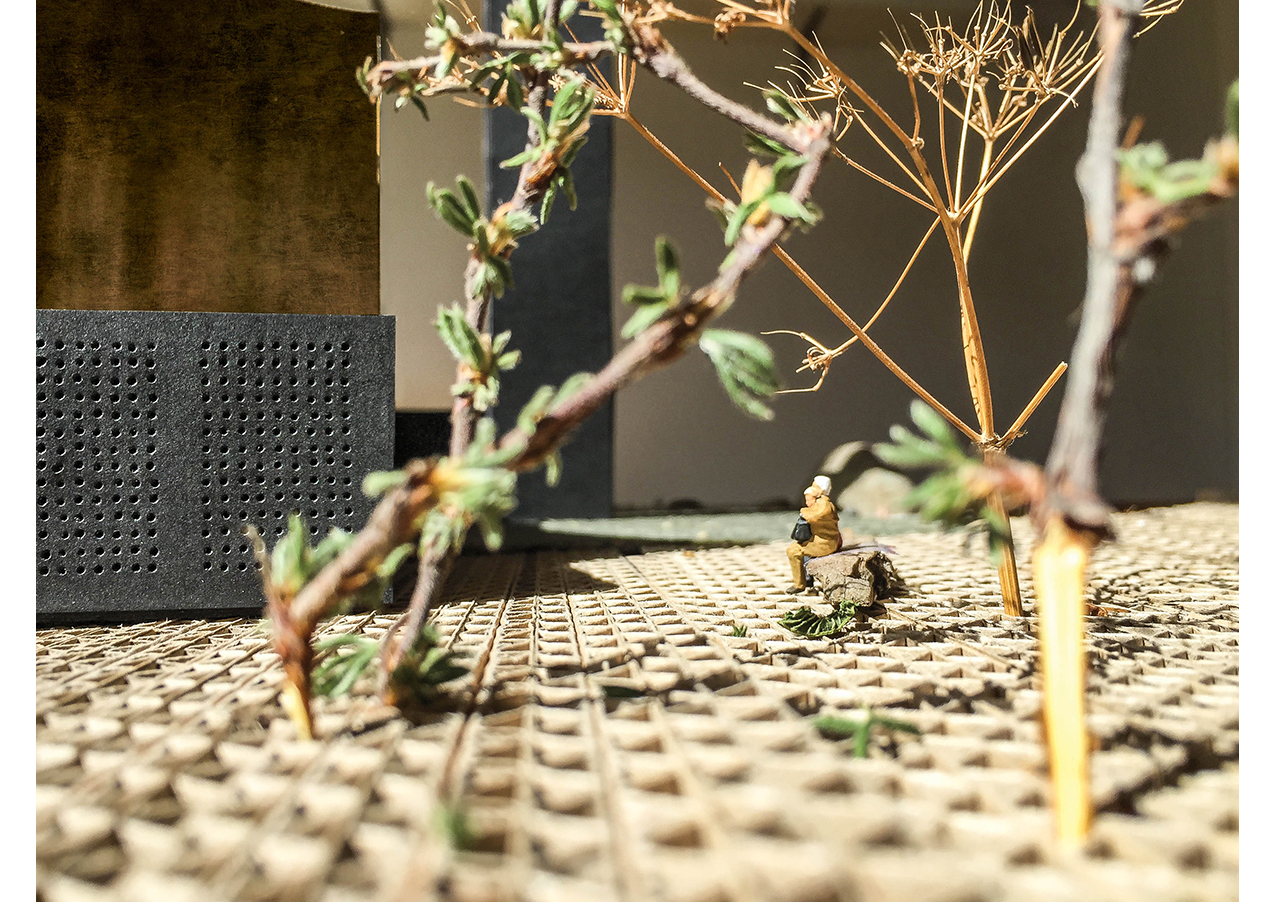 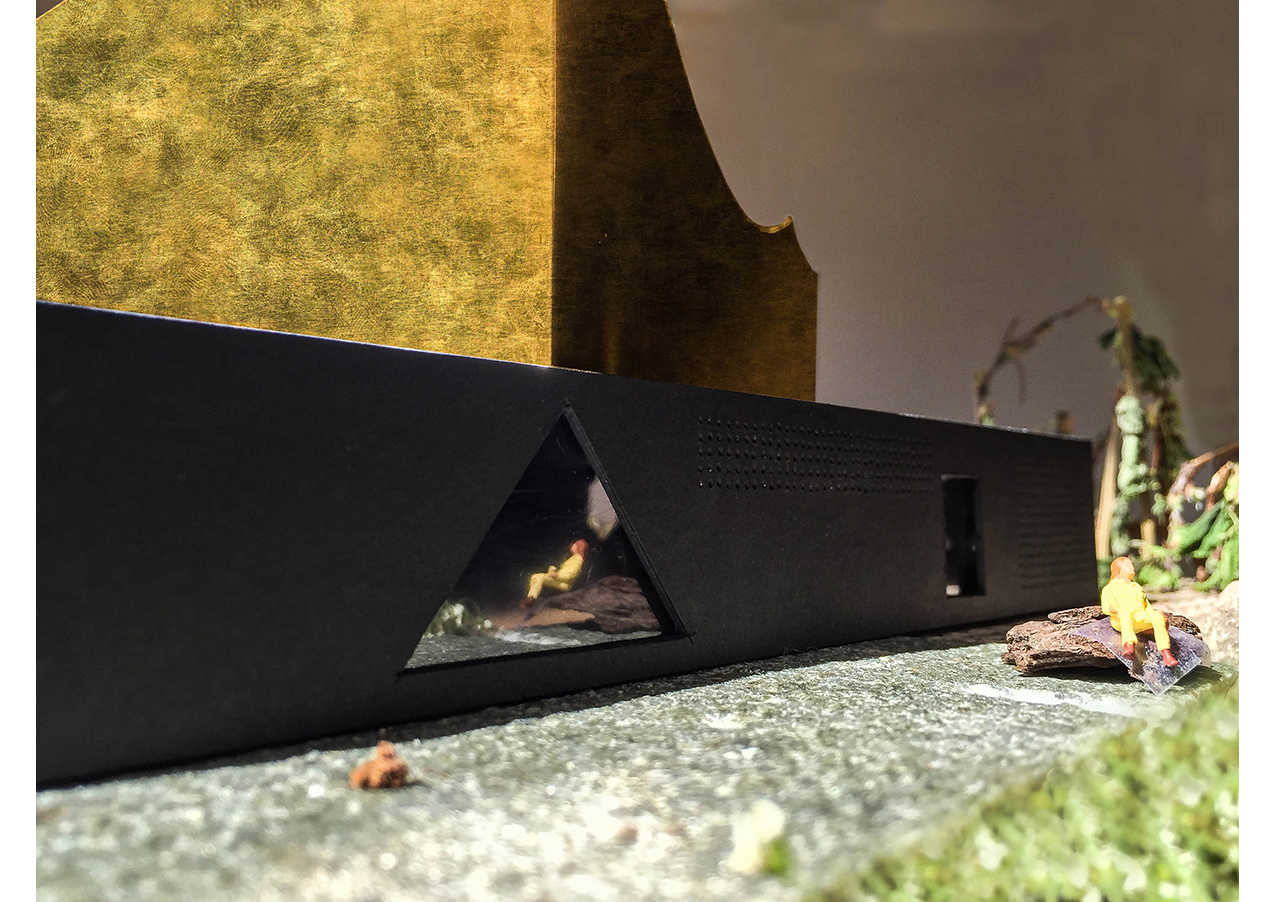 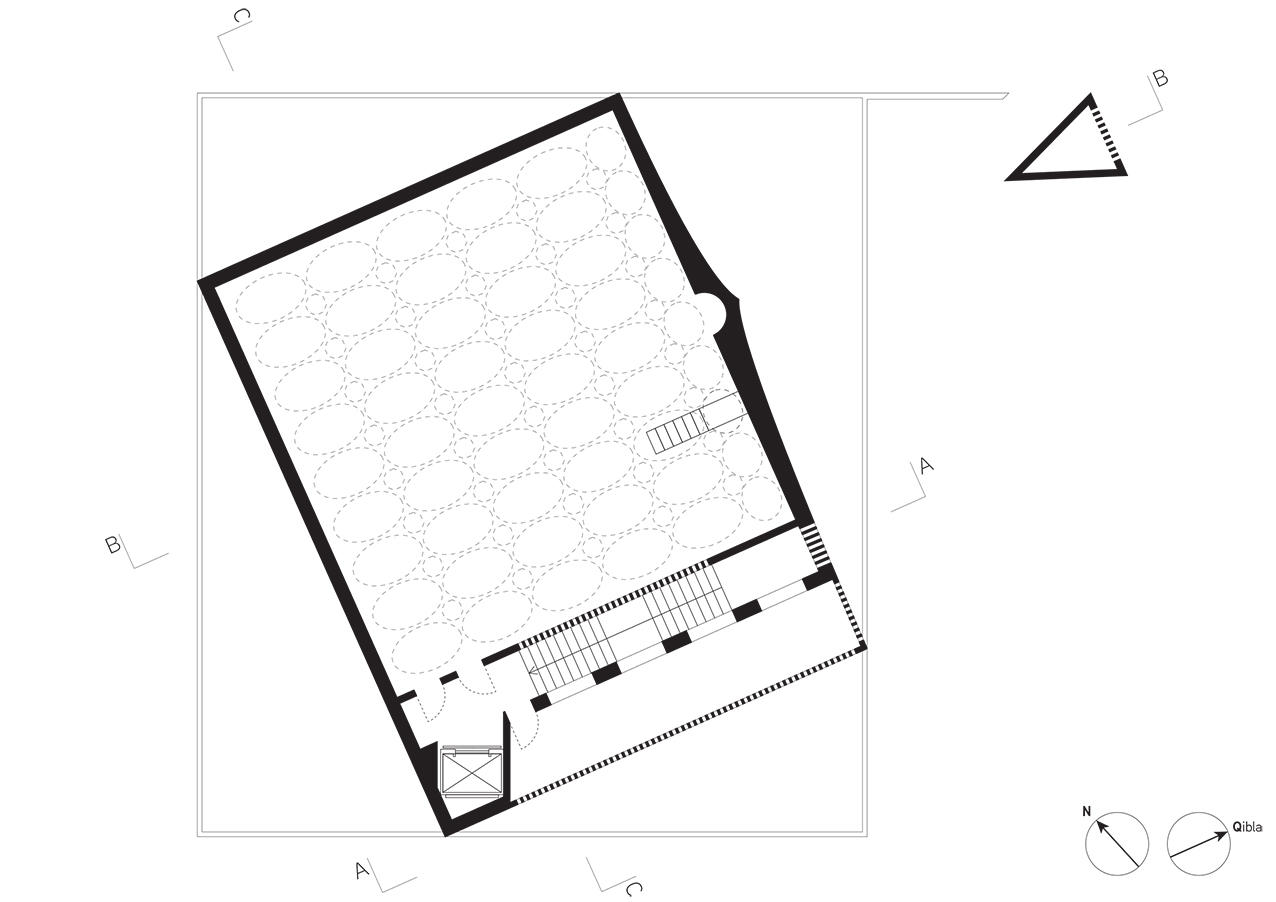 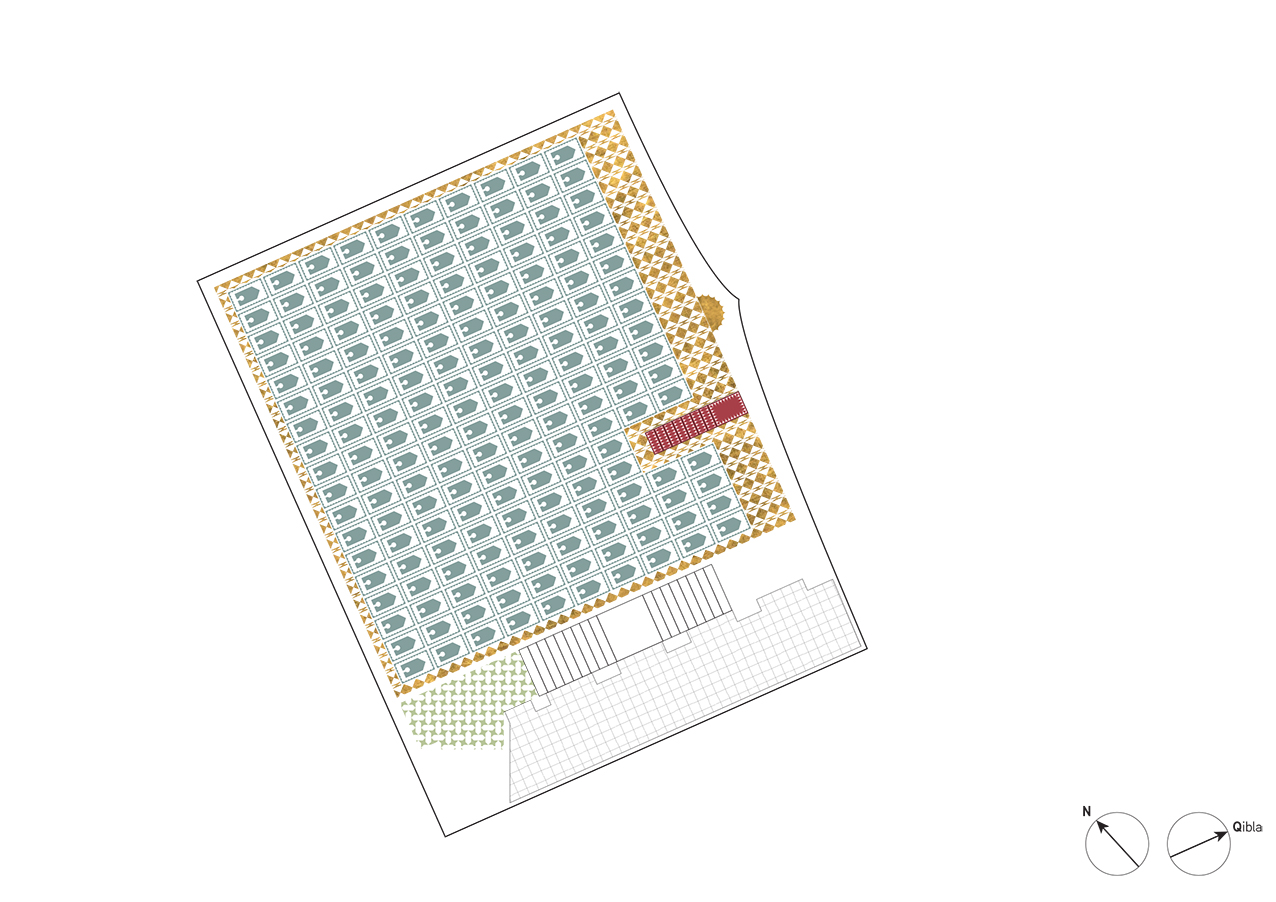 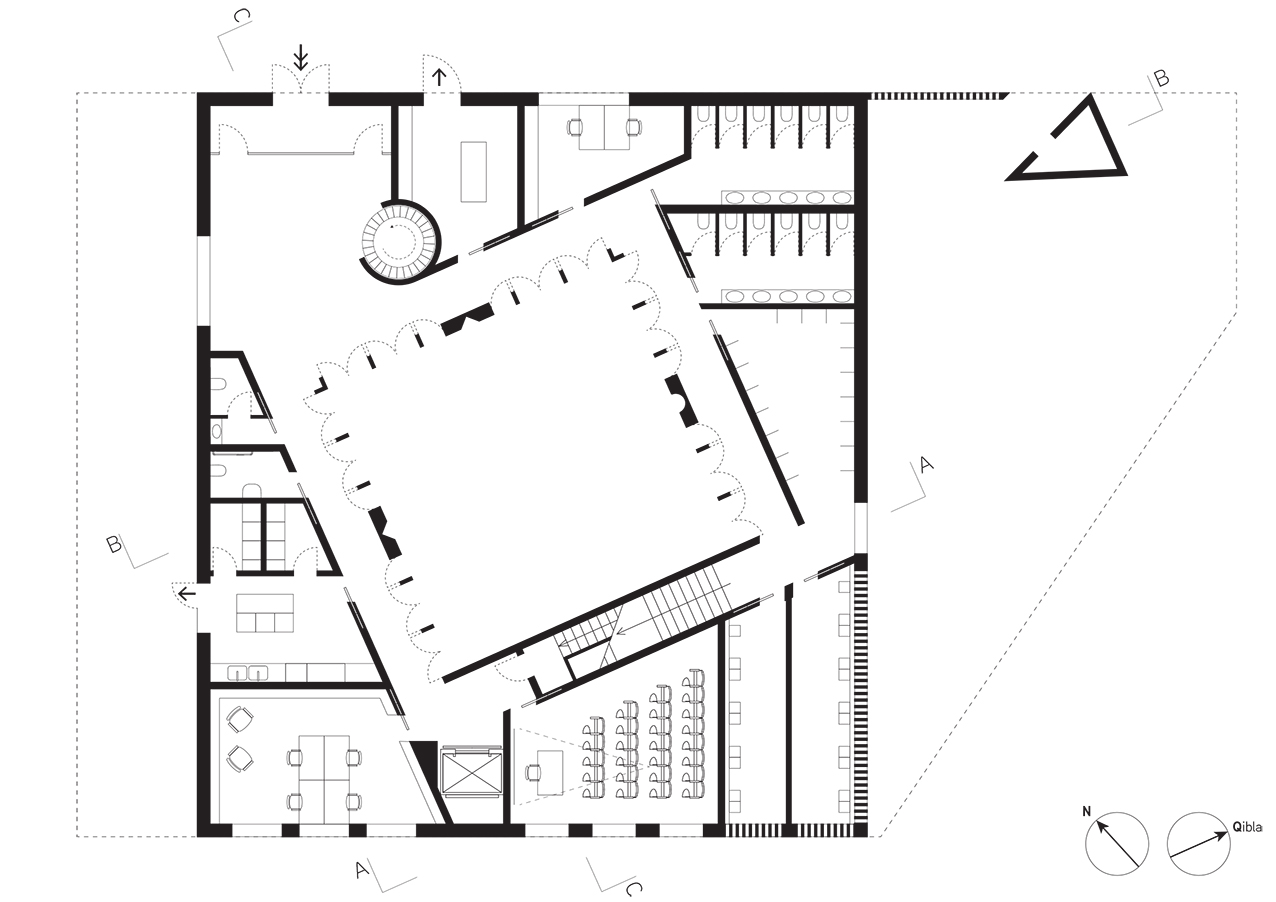 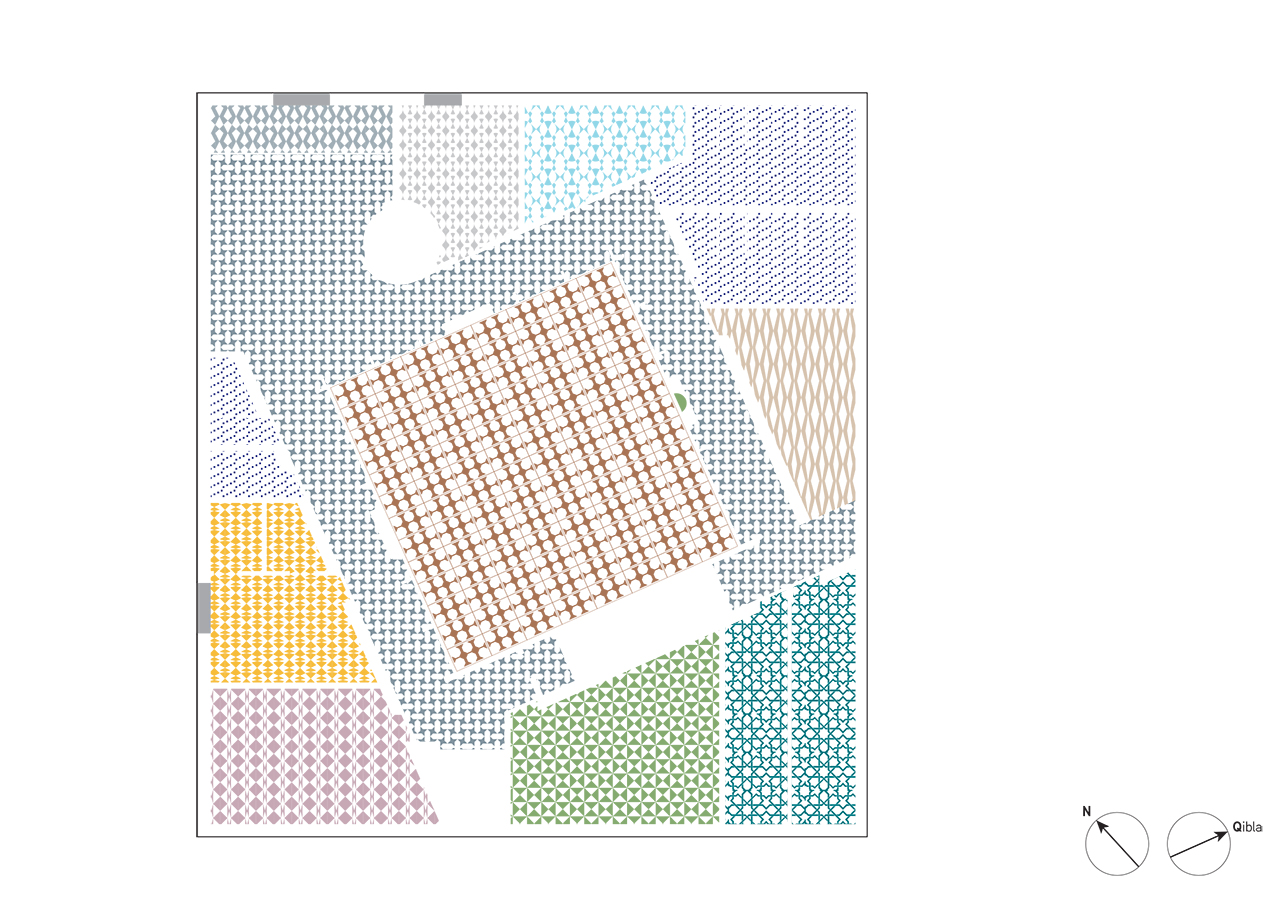 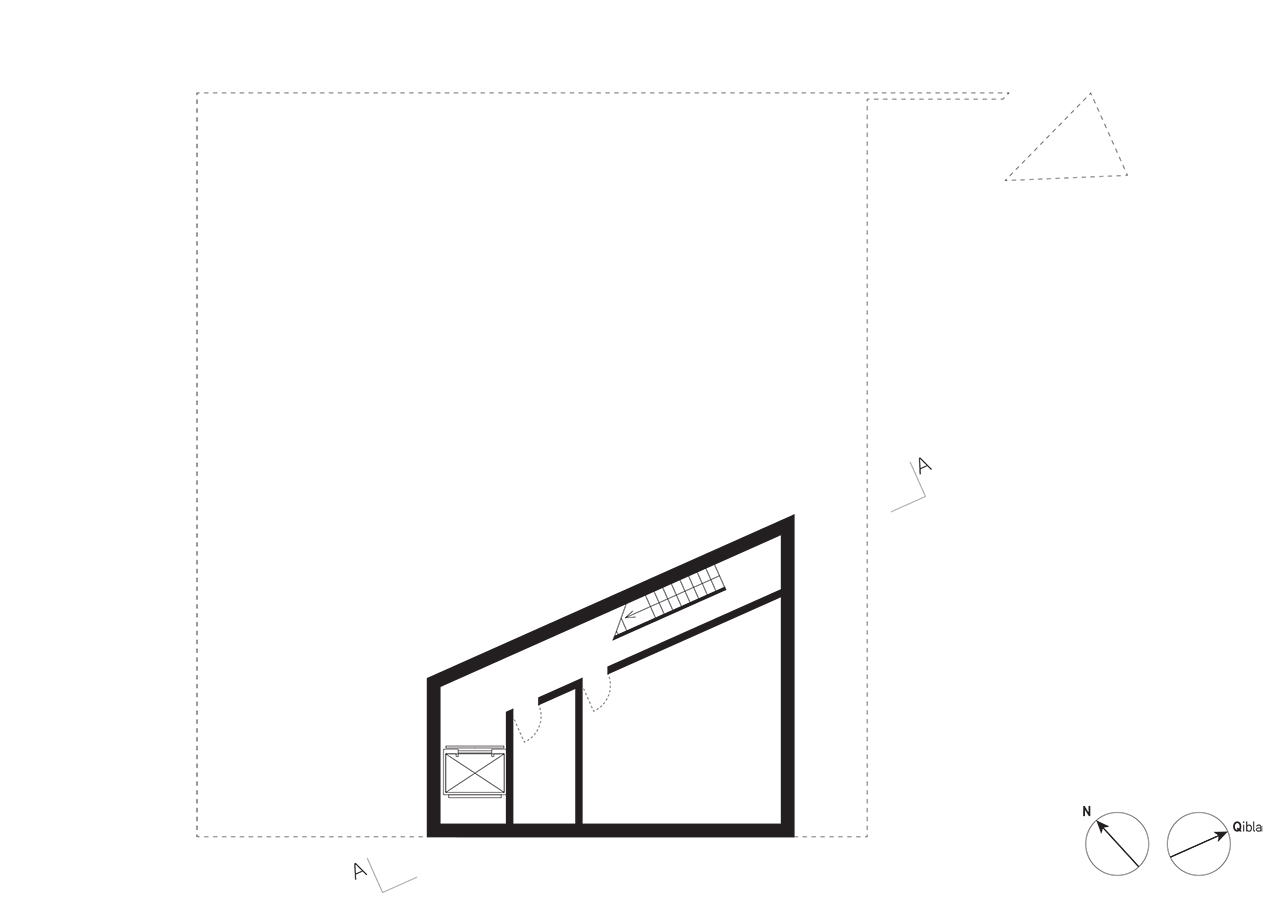 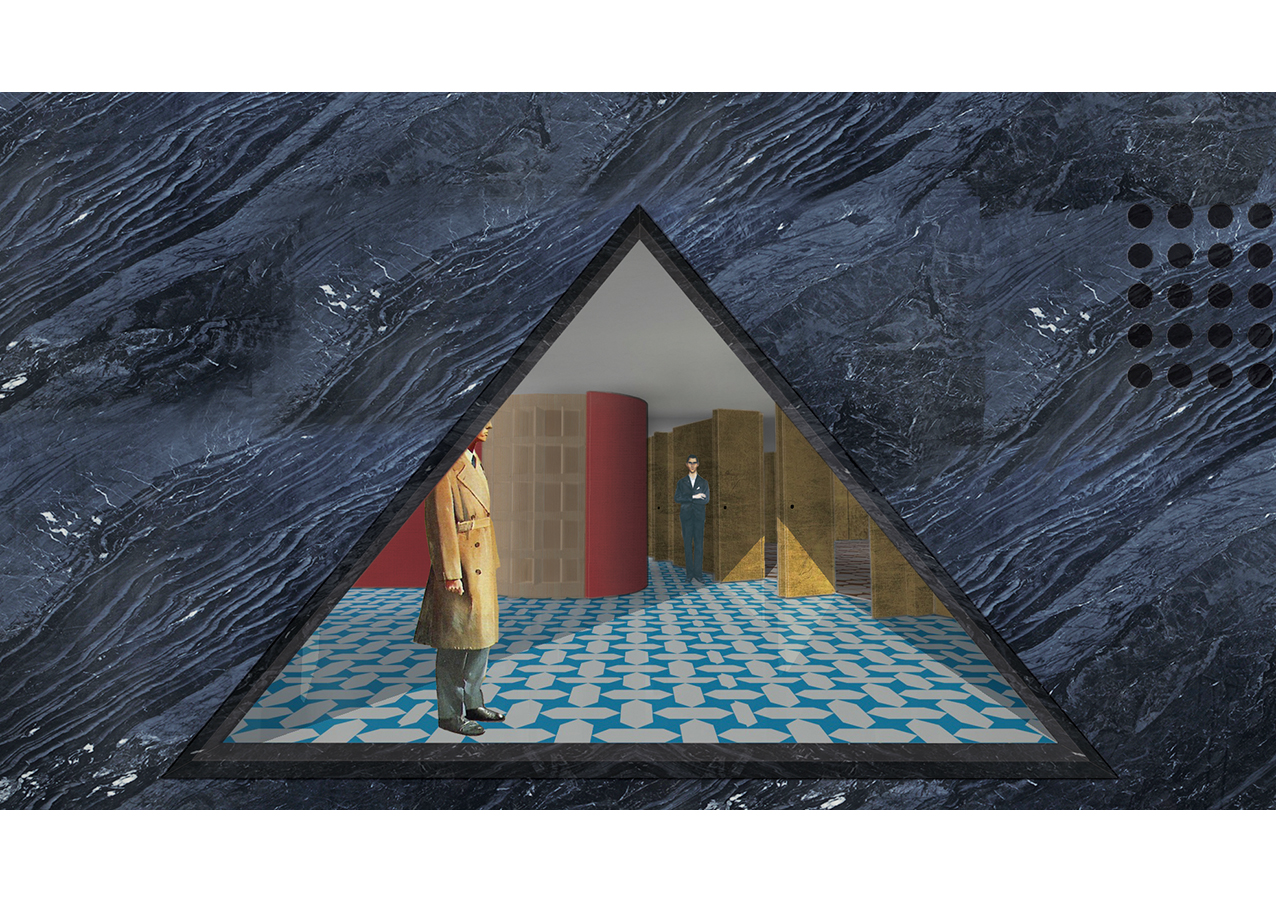 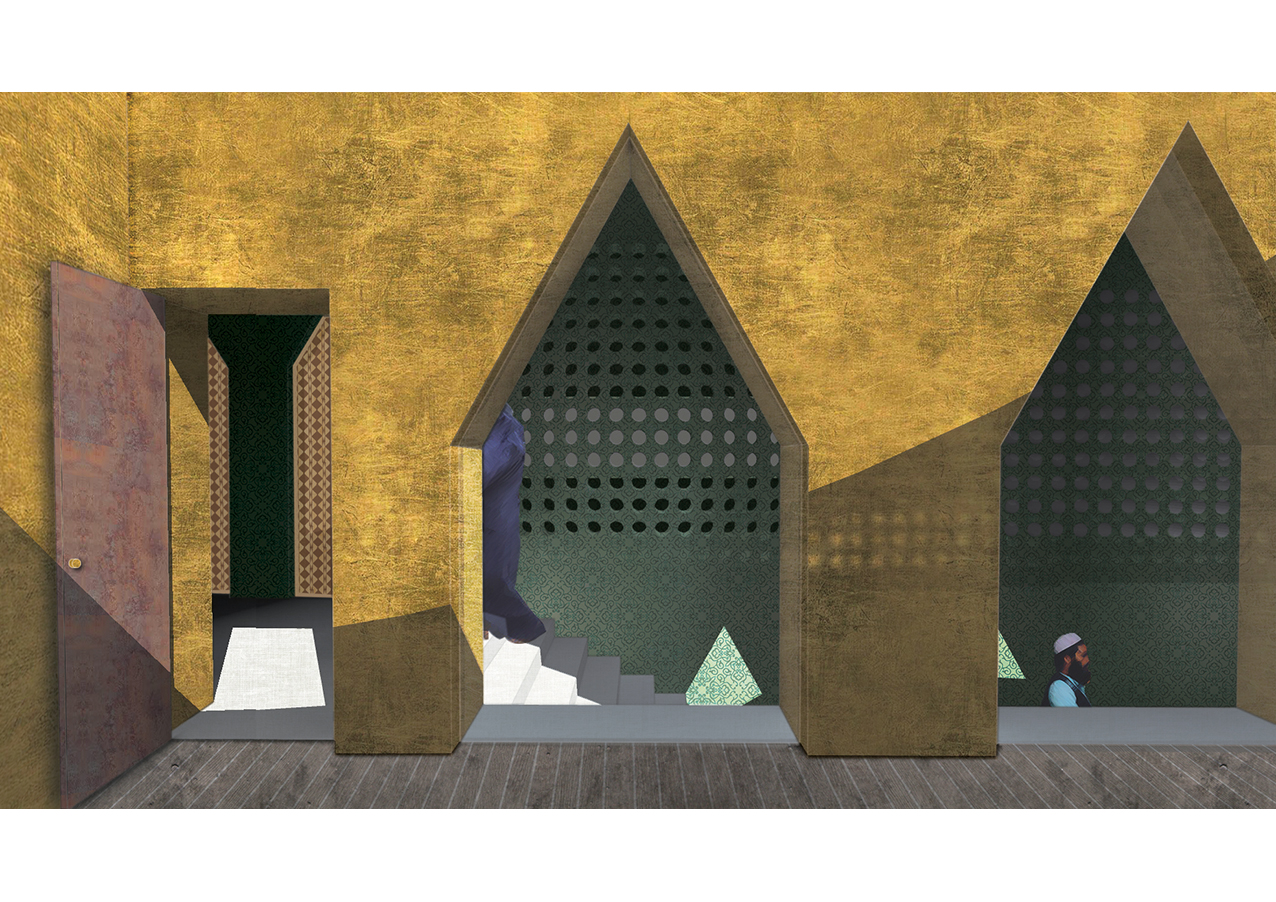 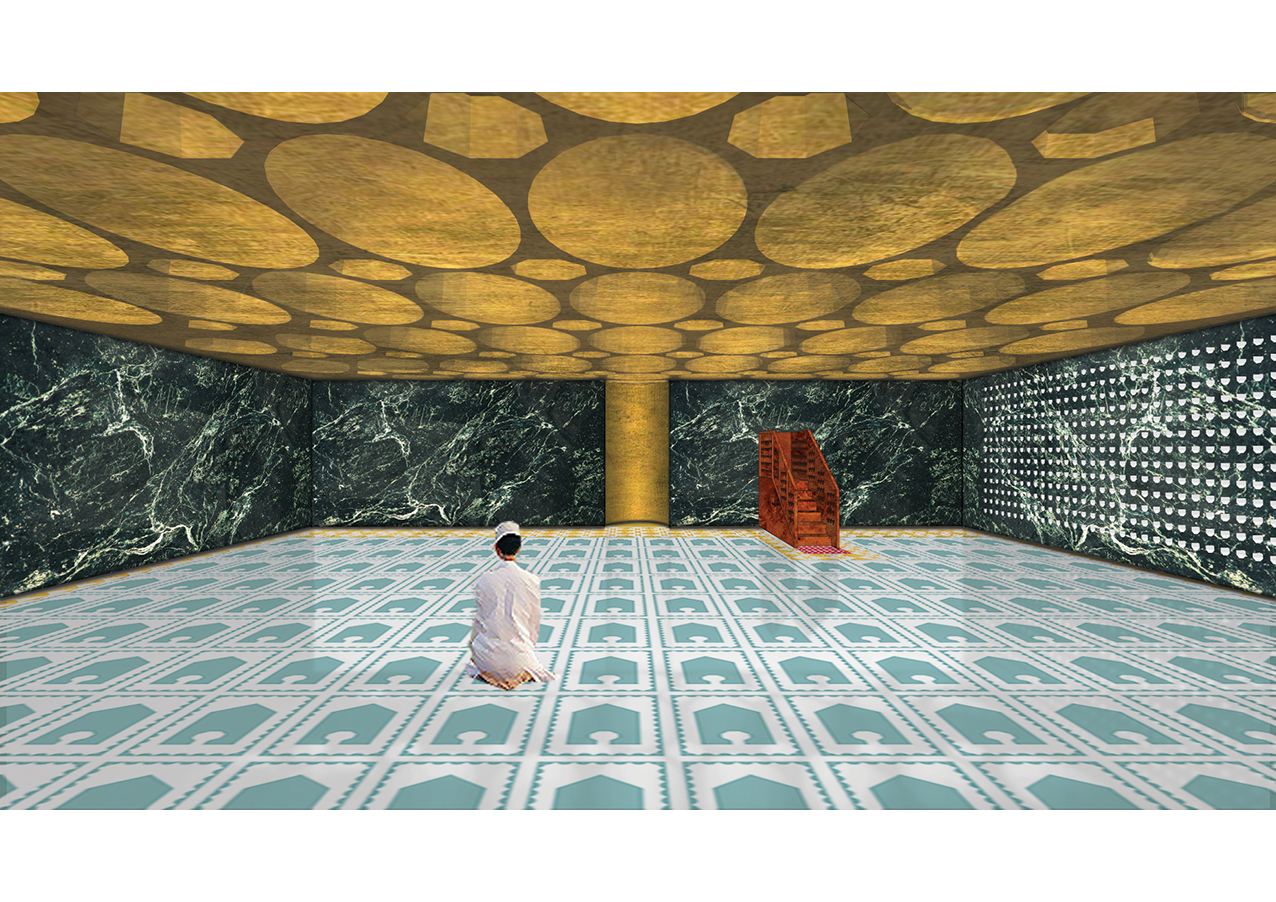 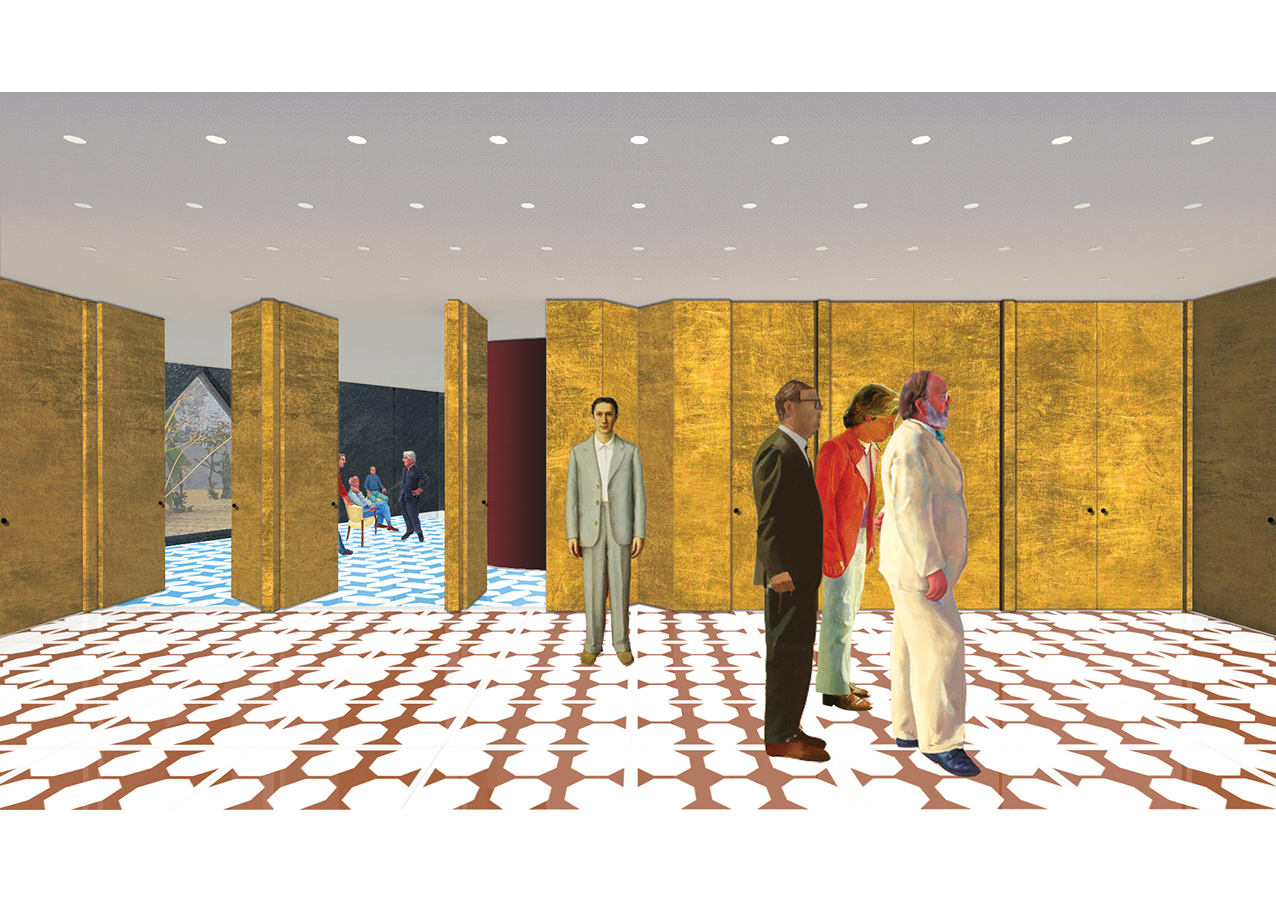 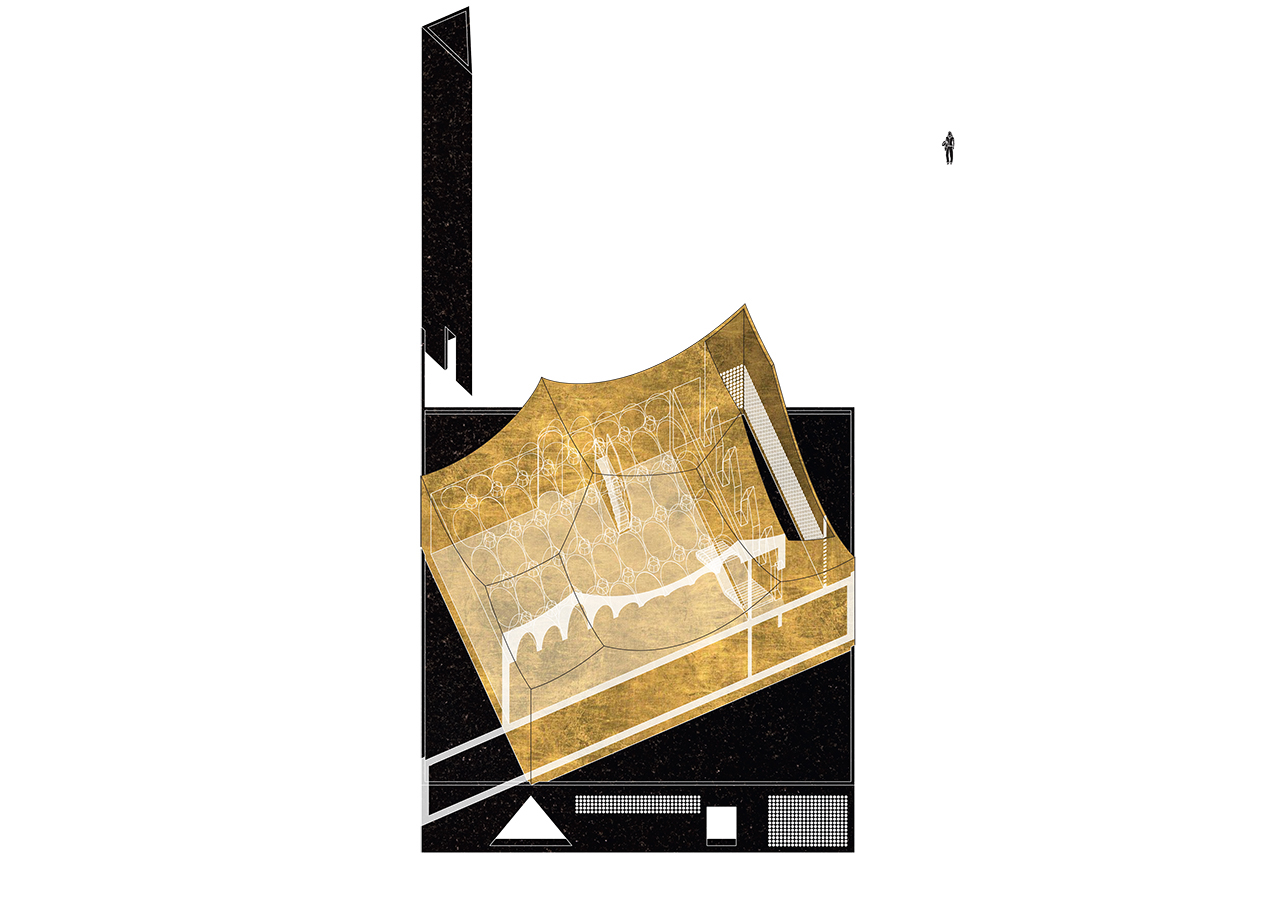 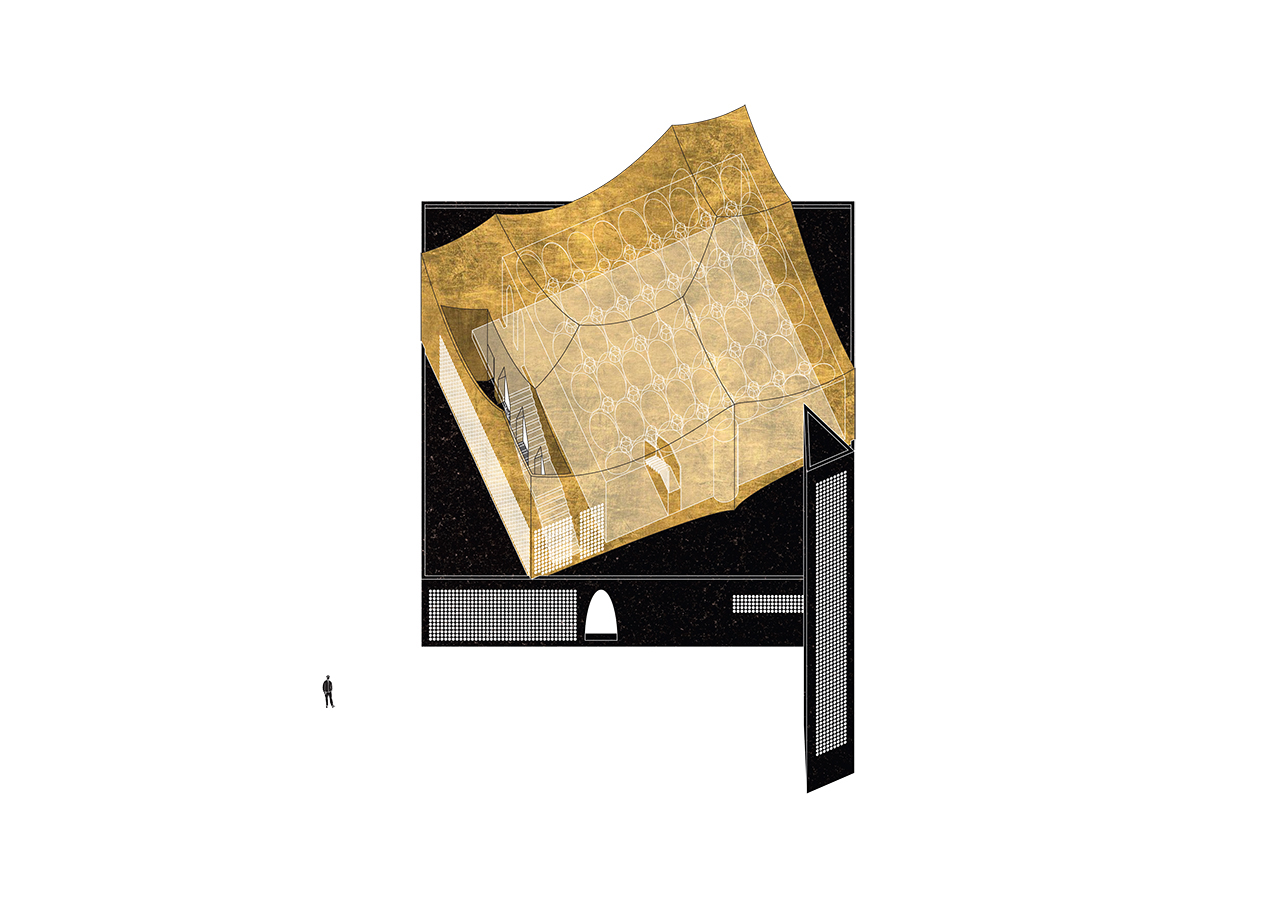 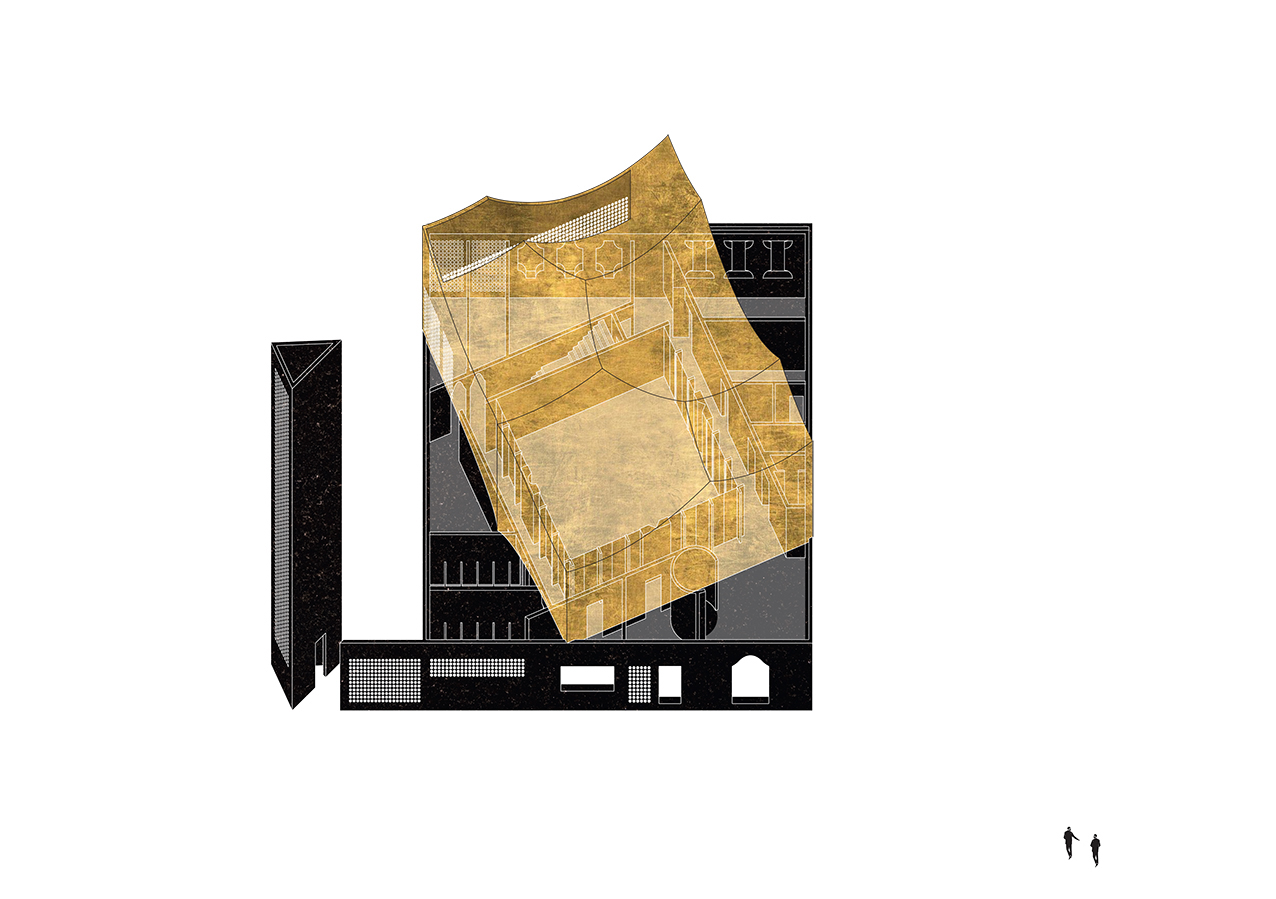 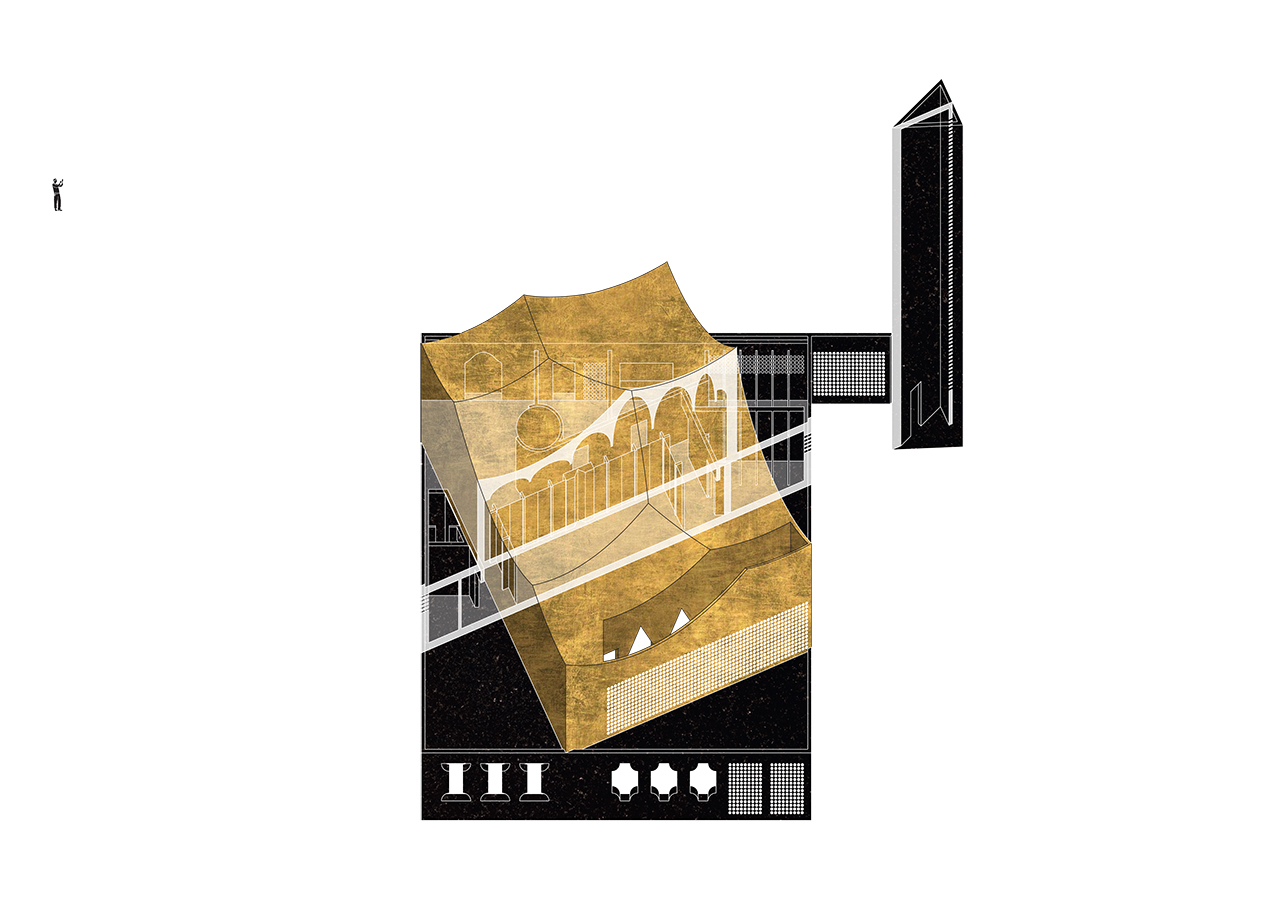 The project creates a place where the Islamic culture could be interwined with the site-specificity of Reykjavik and of Icelandic architecture as the bigger frame.

On one side the promotion, both in terms of collective prayers and cultural activities, but even to consider the building itself a medium of learning about the historical process of the mosque’s typologies considering the Islamic Architecture an important part of the deep culture of Islam.

On the other side the volume itself is conceived to recall the Icelandic Landscape and it is composed of two main parts: a flat simple and solide volume that works as a solid mass and where the local Black Basalt is employed as cladding that hosts all the common areas and the research areas; on top of this the worship is a volume where the geometry of the facades is shaped with several vaults that remind to the picks of the vulcanuos landscape. The façades of the upper volume is a cladding of a an alloy of copper and aluminium that with the natural weathering gradually forms a striking warm golden surface with very unique characteristics able to reflect the surrounding to relate with it.

The reminding are to the atmospheres of the shiny golden pick of the Landmannalauga region, to the golden land of the Mýrdalsjökull Glacier and the Katla Volcan and to the black of the Vík í Mýrdal. On top of this the use of material with a short distance origin is also an eco-friendly strategy in order to reduce the impact of the building.

The stone volume is related to the earth in the ground floor while the golden metal transforms the worship in a suspended volume that recalls to a mystic dimension. In addition to that a tiny tower 19m-tall with a focus on the “qibla” become a landmark for the surrounding and a place of meditation for the visitors.

Every room is a storytelling of the rituality, of the tradition and so of the Islamic culture. The common ground of the space, is a ceramic paving that use several textures in order to help the definition of the singular rooms and to enrich the high quality of the architectural detail.

The plot
The parking is located around the Mosque: this is a good investment instead of dig a parking in the basement. In addition to that using a grey stormwater management system, the runoff is collected and carried away, while being contaminated with pollutants from the road and the parking drop-off surface. Green parking lots have permeable pavers, allowing water to infiltrate, and layers of gravel and sands that filter the runoff. The path to access to the building and to the park allow an universal design approach guaranteed.

In the park green surface, with artificial height are designed to face the problems of the treating of the rainwater and pollution arriving from the next streets and also to create a buffer from the sound and the view of the road with traffic.
Permanent water ponds, grassed swales and vegetation are able to increase the biodiversity being also a guarantee for the sustainable cleaning of air pollution, water pollution and human use.

The Sahn
The ground floor is conceived starting from the typology of the mosque within the islamic architectural tradition. Two main spaces were relevant for our proposal: the Sahn and the Riwaq.

The Sahn, is the large central courtyard usually able to provide for various civic uses. While the Riwaq is usually the arcade or portico open on one side that sorrounds the Sahn.
Our Sahn is the auditorium: located as a room in the centre of the ground floor is an indoor courtyard surrounded by the only corridor that permit the access to all the other functions around and to the worship on the second floor in a ritual circular way.

With its 100 sqm surface and its shape it’s able to be totally flexible and host several functions like a conference hall with the stage and the seating; a dining hall with tables; a place where gathering together and other temporary unexpected functions. In addition to the normal flexibility of a multi-purpose hall what is relevant is that this space could be extent of the 40% just opening all the door and using also the corridor, our Riwaq.

Being oriented focus on the “qibla” and being connected to the worship through a private stair could be considered as an extension of the worship itself.

It’s a space of relation where the ritual, the education, the culture and the meditation could found a place, thanks to its shape and its position.

The Riwaq
The Riwaq is the only corridor of the building. It’s a loop around the central Sahn that allow the entrance to every rooms in the Mosque. The lobby, located in one of the corner of the simple flat volume, is the connection between the outside and the internal circulation. In the entrance a circular device hosted the shoe storage and introduce the people to the space.

The service and the common areas
All the functions are located along the perimeter of the central assembly hall.
The office and the embalming room are located close to the entrance and clockwise direction a ritual sequence of restrooms, cloackroom, ablution rooms led the people to the stairs where going up, the worship could be reached.
On the other direction the kitchen is located in order to be easy connected with the exterior; while the functions related to the research: the library and the classroom are easily darken but keep a meditative view towards the park. Under the main stairs a service stair is located to allow the connection with the storage for the assembly room and the technical room. Both are reachable also with the lift in order to have a complete universal design in the entire building.

The worship
The worship is contained in a shaped volume on the second floor. It’s the only function on that floor, following the ritual of going up to pray and be isolated from any other functions.
It is oriented focus on the “qibla” and its ceiling is sculptured with a sequence of several dome visible only from an interior point of view that allow to have several heights and a richness of the vertical space. From the outside each facade is cut with a hyperbola to a maximum of 9,5 m while the roof is made of curved sails to allow an easy management in winter season.