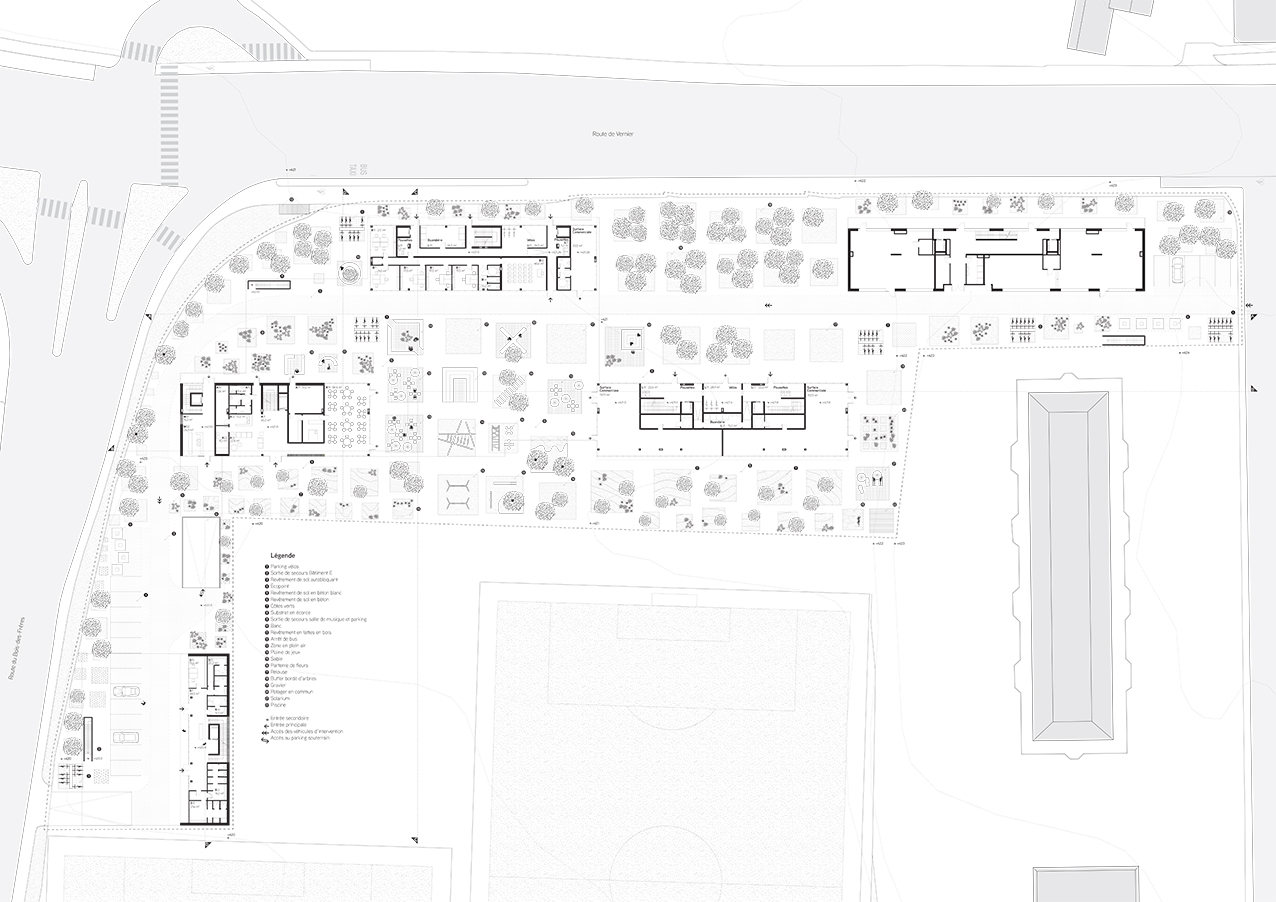 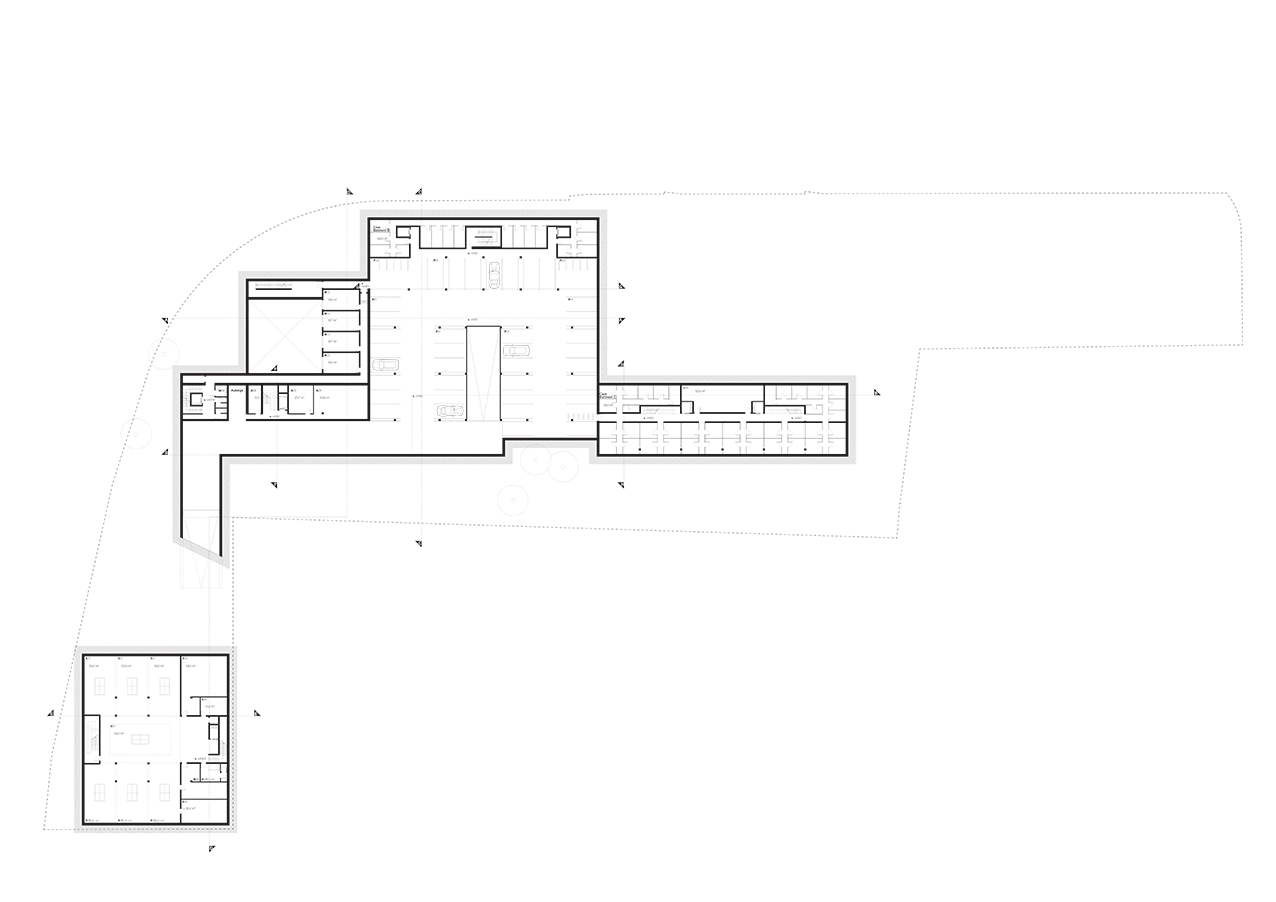 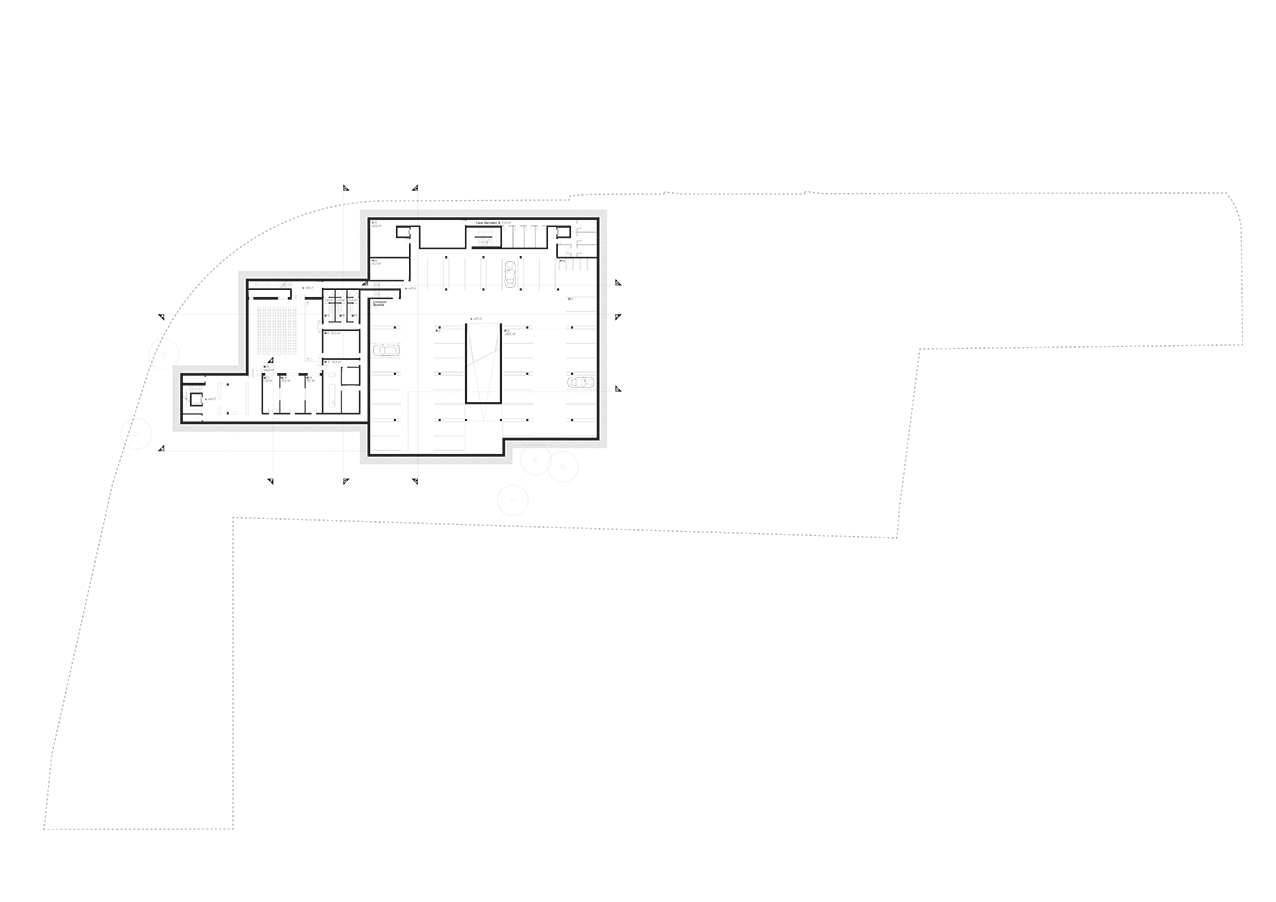 The project aims to insert the intervention of the Plan localise de Quartier n°29819 in a larger system. In this area a series of interesting aspects can be found, starting from its strategic location, as it is well connected both to the highway and the nearby airport and to the city centre, mainly using the Route de Vernier, an important Genevan infrastructural axis. At the same time, slightly southern, less than 5 minutes far on foot or by bicycle, it is possible to dive in a highly valuable natural context, the Bois-des-Frères, which faces the Rodan and is crossed by various cycle-pedestrian paths for the loisir.
On the north side of the area instead, between the Route de Vernier and the railway, a residential district “resists”, even if it’s quite dated, keeping impressive characteristics such as the presence of centuries-old trees and a public garden.
In this context the tile included between the Route Chemin de l’Ecu in the south-west, the Route Du Bois-des-Frères in the east and the Route de Vernier in the north represents a heterogeneous system, due to the presence of the sport facility, of the retail activities and of the last residences before the industrial zone in the east. By now this system doesn’t allow to take the potentialities described above and the project, with a homogeneous design of the outodoor spaces, tries to create the premises for the greatest usability of this last part of the city. Reading this tile as a conclusive element of a system allows to understand its uniqueness and therefore the design of the outdoor spaces, as well as the one of its architectures, in the larger context of the city of Geneve.

The outdoor spaces as an element of connection
The designing of the outdoor spaces within the contest area creates a system of squared elements “leaning on” or “dug in” a slightly steep white concrete ground (it is higher on the west side and lower on the east side). From time to time, these elements hosts those objects that are most useful in the area of the element itself. They can be simple flowerbeds or one-meter tall pools in order to house small trees; moreover, they can become relaxing zones with shaded benches or playgrounds for children; finally they can even be parking lots for bicycles or wooden terraces for the restaurant of the hotel. All these elements work together to create a homogeneous space in its shape but heterogeneous in its contents, as each material (grass, wood, tartan) is used for different purposes. Their extrusion, more than the designing of flat spaces, depends on the position of each element in the project area; if it is placed close to the entrances of the lodgements it can become a parking lot for bicycles, while if it is placed on the underground built area it can turn into a pool to house small trees. The entire surface, on which these elements lie, represents the common ground for all the buildings and the connection with space that are external to the area will be built in concrete and with a slight constant slope in order to absorb the various declivities of the area. With respect to the indication of the PLQ, all the buildings have been made accessible for emergency service, creating a continuous paved path acting as a cycling lane and crossing the whole area from east to west, therefore connecting the Route de Vernier with the Route Bois-des-Frères.

The ground floor as an element of aggregation
The ground floor of the buildings are thought as an element of aggregation and for this reason they are treated uniformly. The basic idea is to build, along with the designing of an outdoor space, a kind of surface in which the functional mixitè can create similar situations to the ones of the historical city, where safe is given by the constant presence of people at different times of the day.
In the lodgements the glazed space can be found both in the bicycles zone and in the laundry and is alternated with the shop windows of the retail activities. Some offices and a conference room have been placed on the ground floor in Batiment B, in order to create a relationship with the opposite outdoor space. In the hotel, the restaurant room is designed as a double-high glazed space facing the public zone, whose terraces constitute one of the squared elements (wooden platforms with tables and umbrellas). Even the junesse zone, which is designed to be underground, presents a large glazed space that indicates the entrance and that faces the public space. The sport facility, even if it’s a bit in the background, is thought as a glazed portico, in order to relate to the public space too.

The buildings as a relation system
The buildings of the area are thought to have similar dimensions, alignments and ratios. In order to state this uniformity of treatment a small and simple range of materials is used, taken from the history of Vernier, and particularly from the nearby area of Bois-des-Frères. In the past the latter was in fact an important zone for the presence of wood (from the forest) and stones (sandstones, from the cave on the Rodan). The project tries therefore to decline these two materials inside the building, with different applications from time to time, depending on the function of the building itself, but not on the typology. The solidity of the stone, translated into black polished concrete, is taken as the material element composing the buildings, in which wooden boxes inserts themselves, creating living rooms for the lodgements (B e C) or the collective spaces of the hotel (A), consequently appearing as more domestic zones. Since there were numerous restrictions within the acoustic pollution regulations (OPB) and the risk of explosion (OPAM), two residential typologies have been studied for the lodgements of the B and C Batiments. In Batiment B the walkaway typology allows the rooms not to face the road while having all the living rooms overlooking the wooden “box” of the walkaway. In Batiment C the central staircase makes the whole perimeter of the building free to have views, especially considering the living rooms facing the wooden box of the terraces. According to this arrangement, the central axis of the area becomes the view for the bedrooms and it is treated with only one type of opening. In the hotel the wooden box is made of internal common zones and therefore appears more introvert and hidden; here the solidity of concrete is interrupted just by the openings (presenting the same dimensions and craftsmanship as the ones of the lodgements) and by the entirely permeable and glazed ground floor. In the sport facility the entrance portico is thought to protect sportsmen and spectators before and after a competition. In addition to this simple material grammar, an equally simple stylistic grammar is found using only one type of window to be matched to the concrete treatment for Batiments A, B and C and a system of entirely glazed openings, with wooden sliding brise-soleils to be matched to the wooden box, all of them made with X-LAM technology. Other types of languages are punctually used for offices and distribution zones for buildings A and E, avoiding that these interventions would affect the homogeneity of the entire treatment.

The underground as a rationalisation of the spaces and the costs
The project area presents two underground zones. The first one, consisting of only one level, is found under the sport facility, recreating its shape. It is a large space where all the ping-pong tables and service rooms are arranged forming an “S”. This is a very flexible space and can be used in different ways in case of special races or events, acquiring all the areas as according to the contest program.
The second underground area is placed under Batiments A, B and C and it is thought to host the service rooms of the lodgements and the hotel, the parking lots required by the contest program and the junesse zone. This area is organised in two levels, one (the junesse zone) slightly staggered compared to the other (the parking) in order to have the requested height for the concert hall. This location allows to have a reasonable rationalisation of the underground which is translated into a rationalisation of the costs and the program.