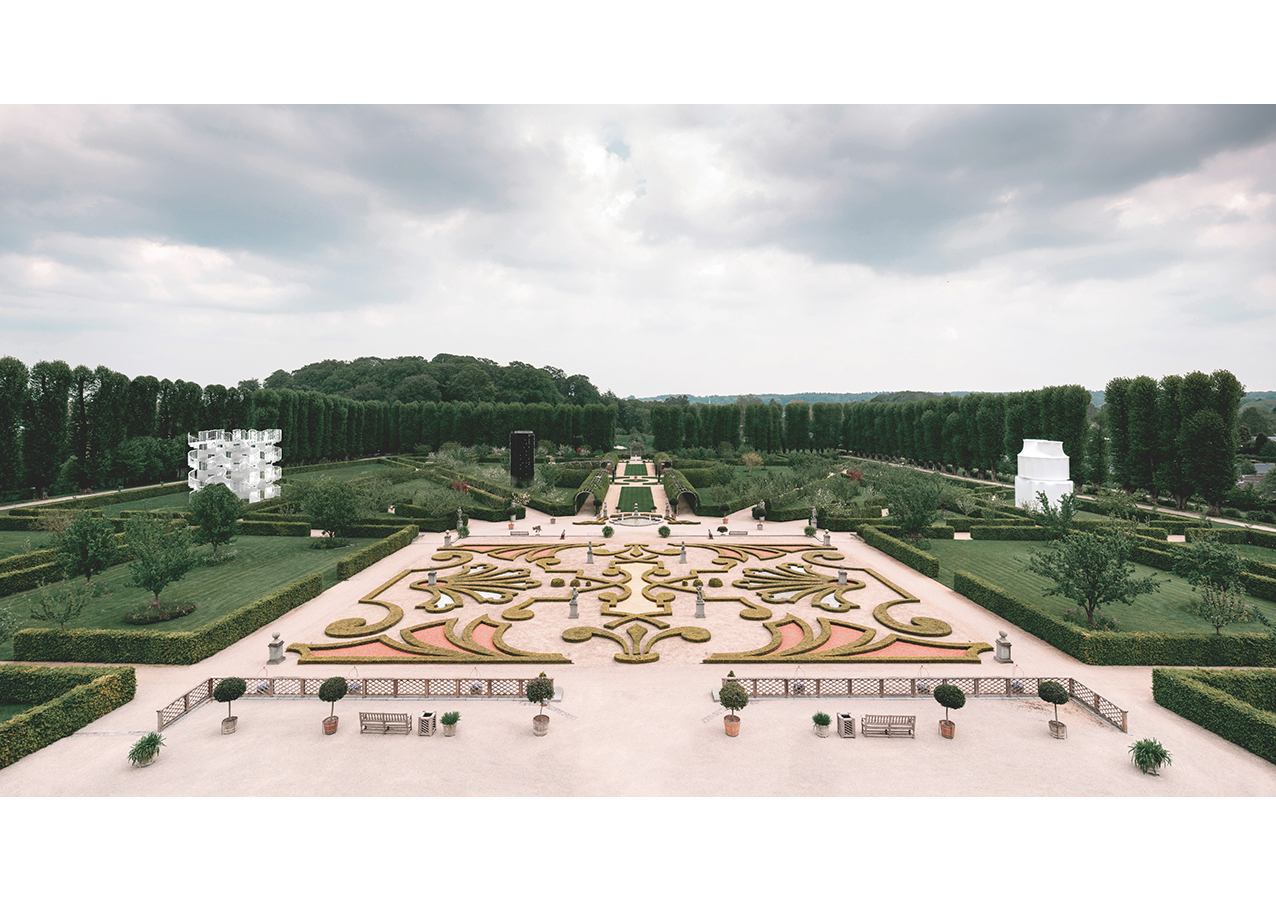 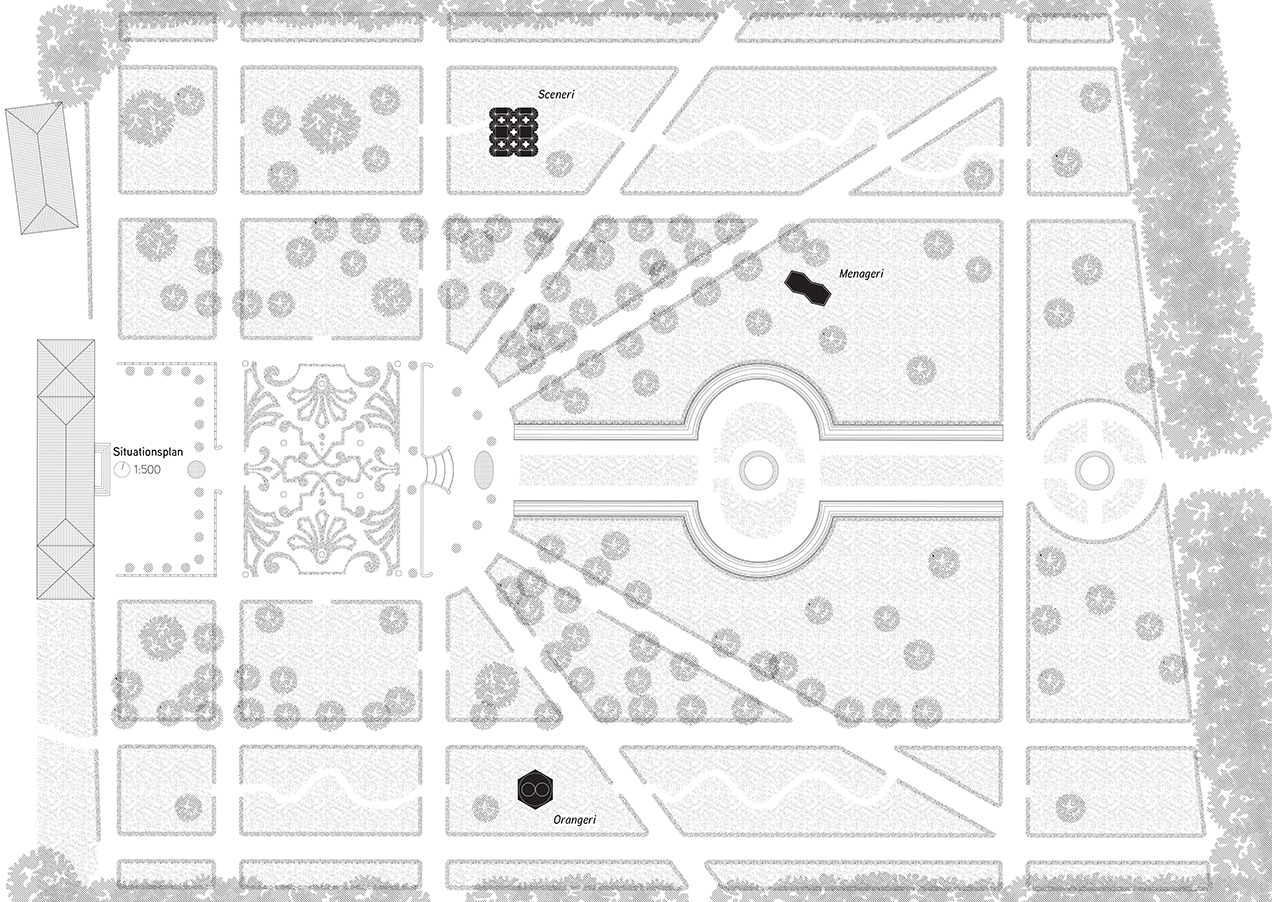 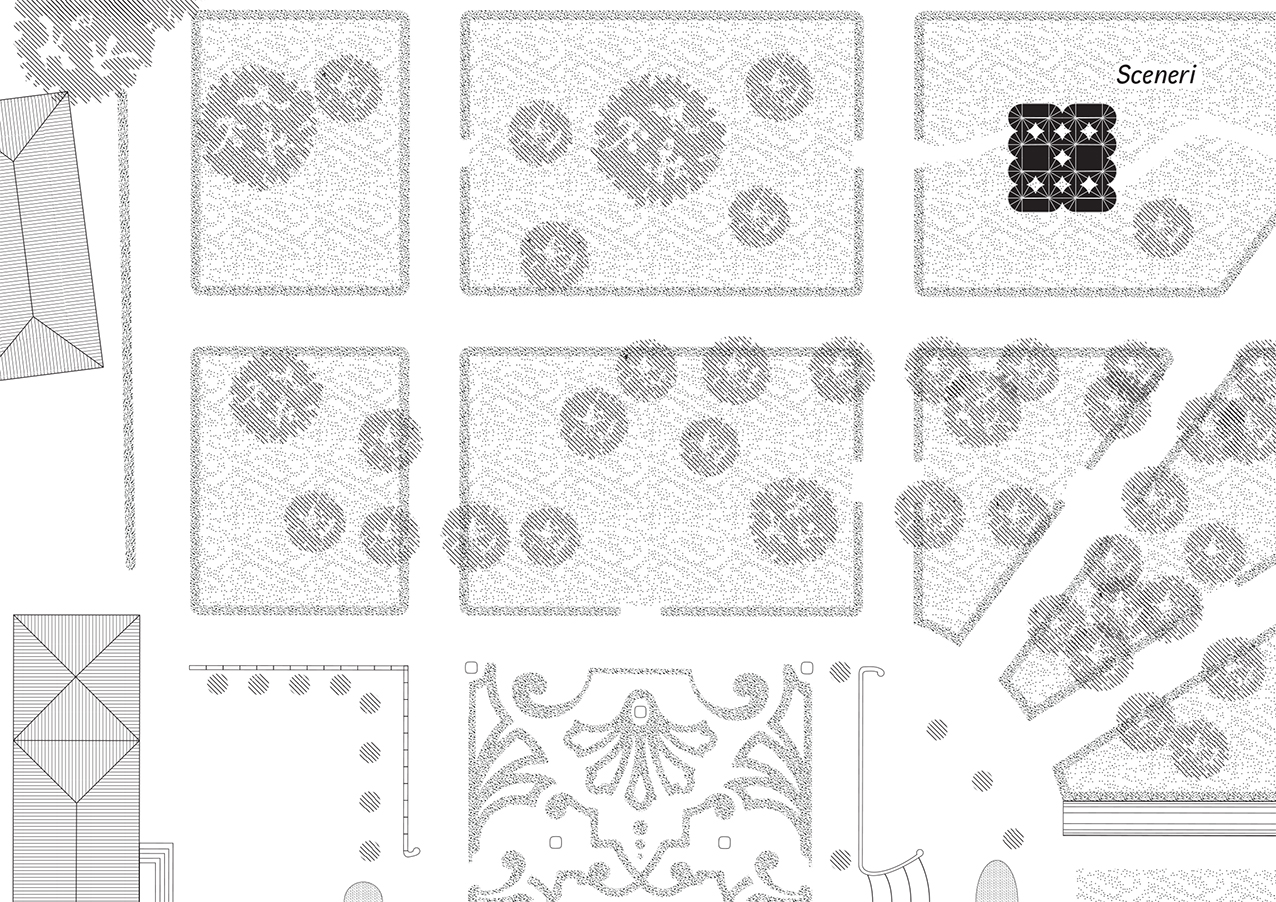 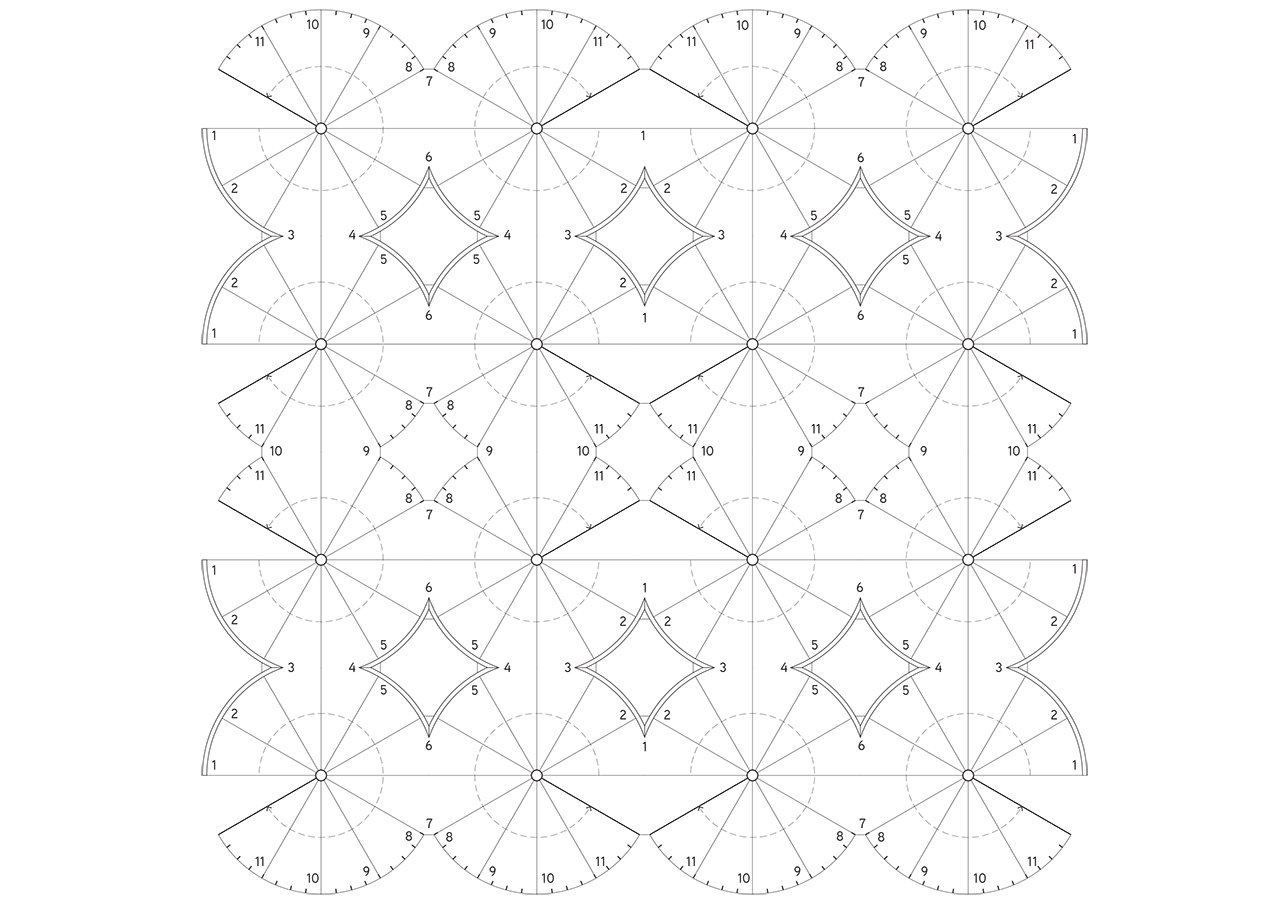 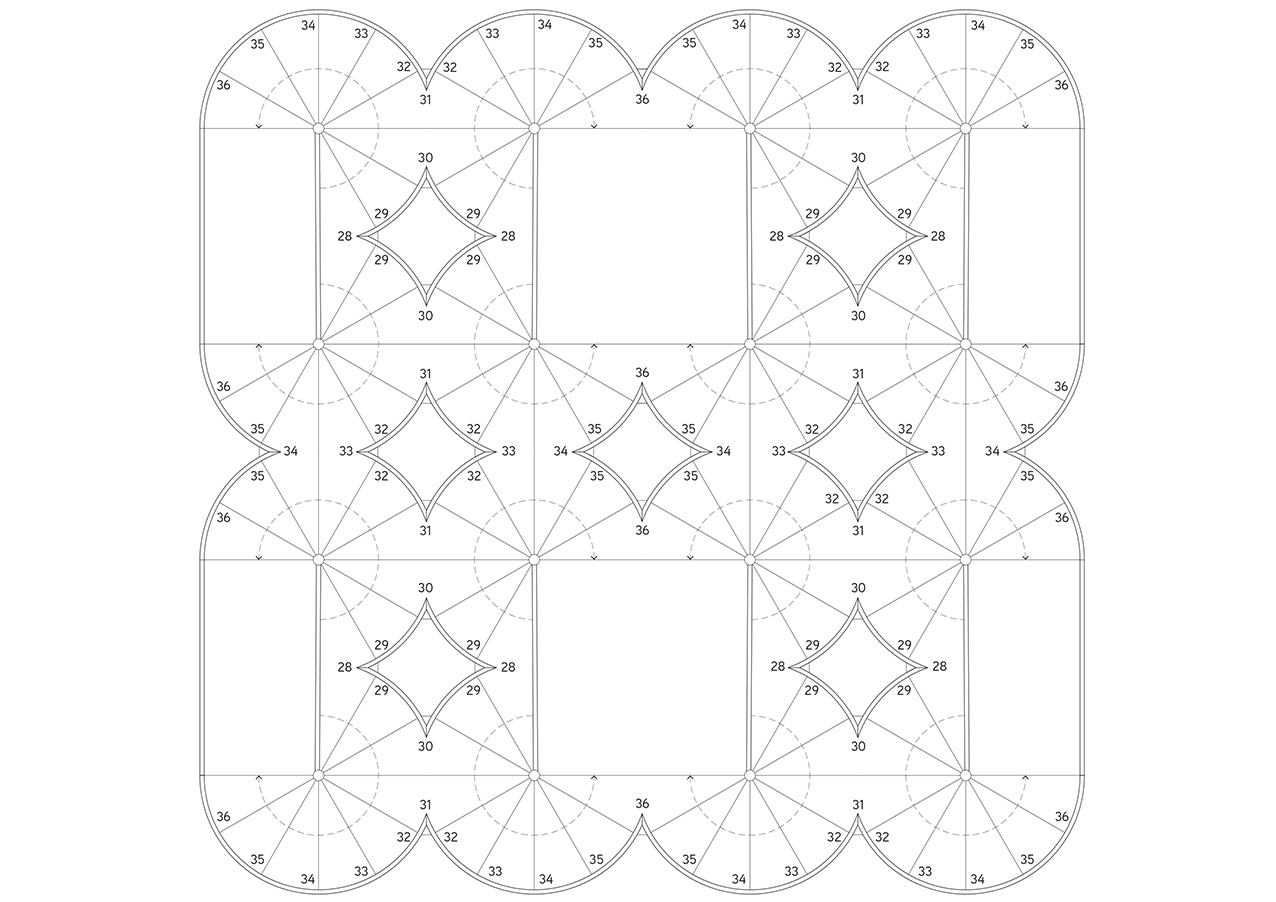 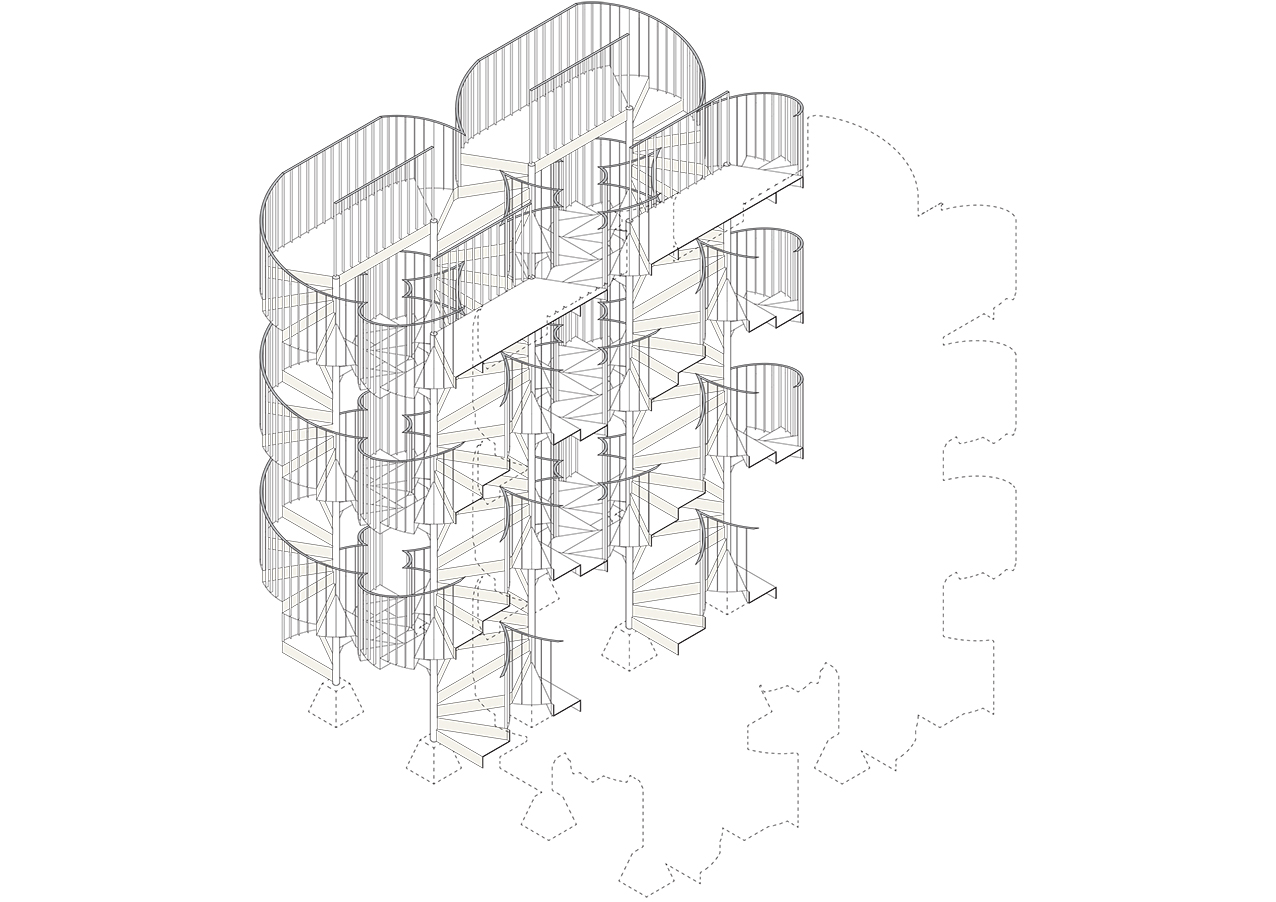 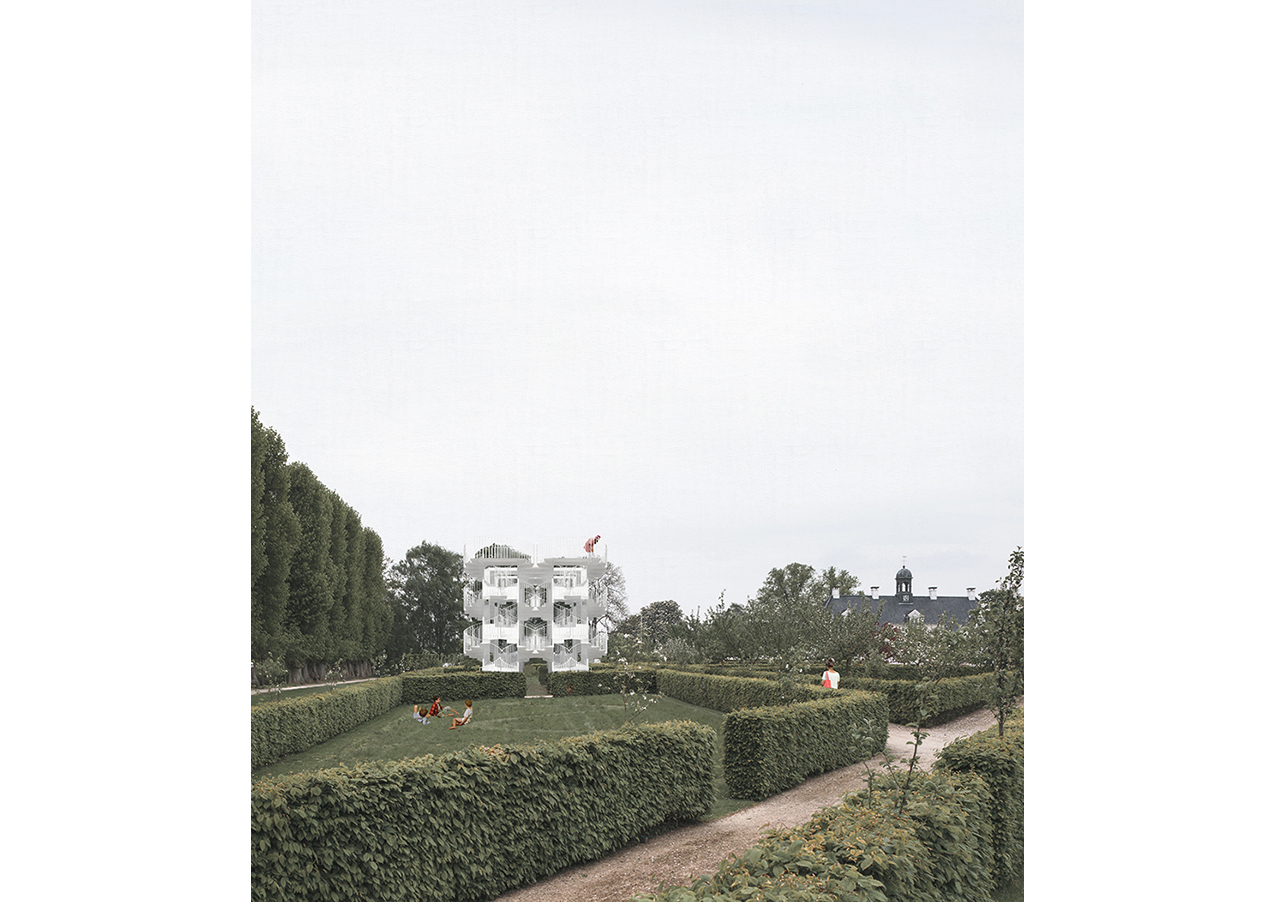 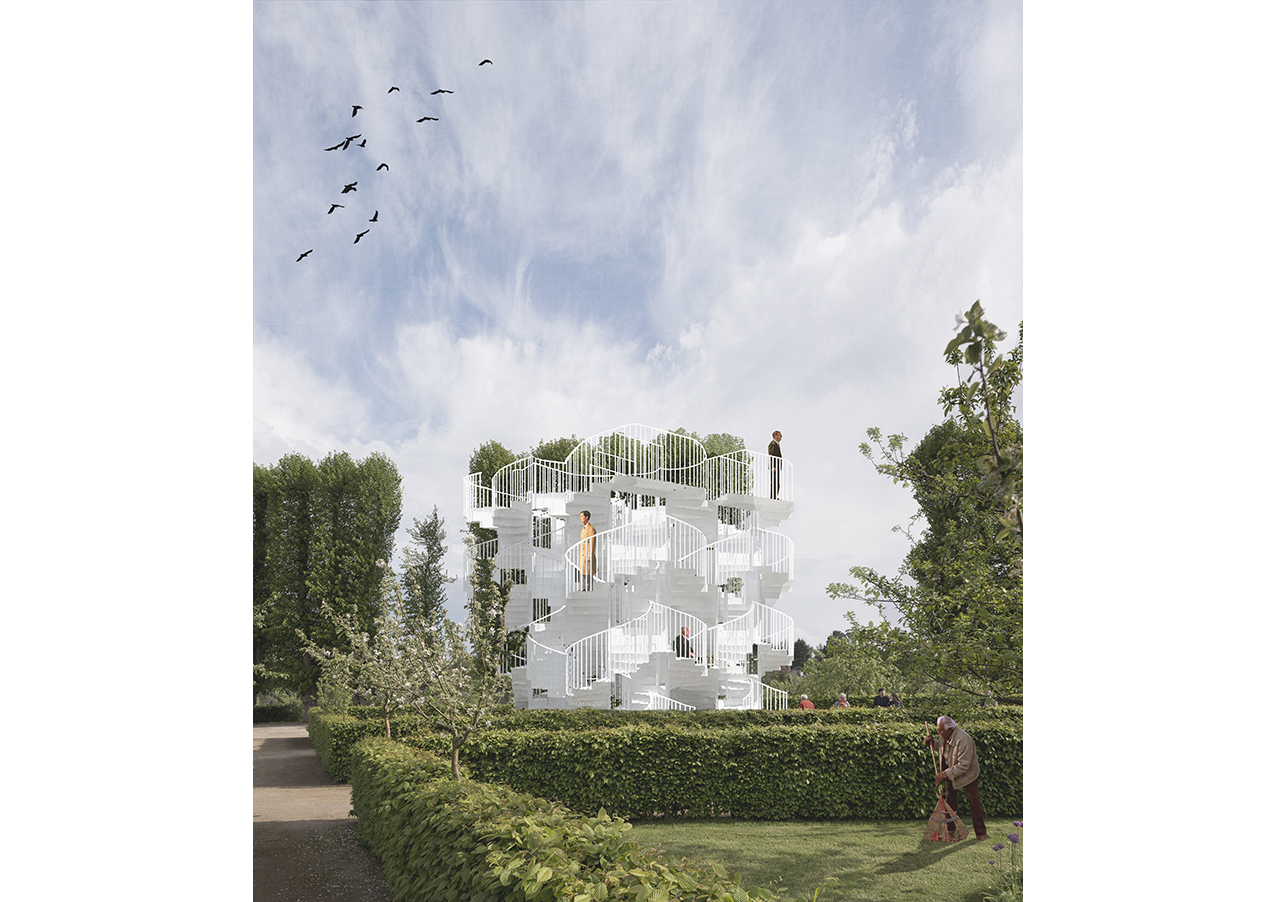 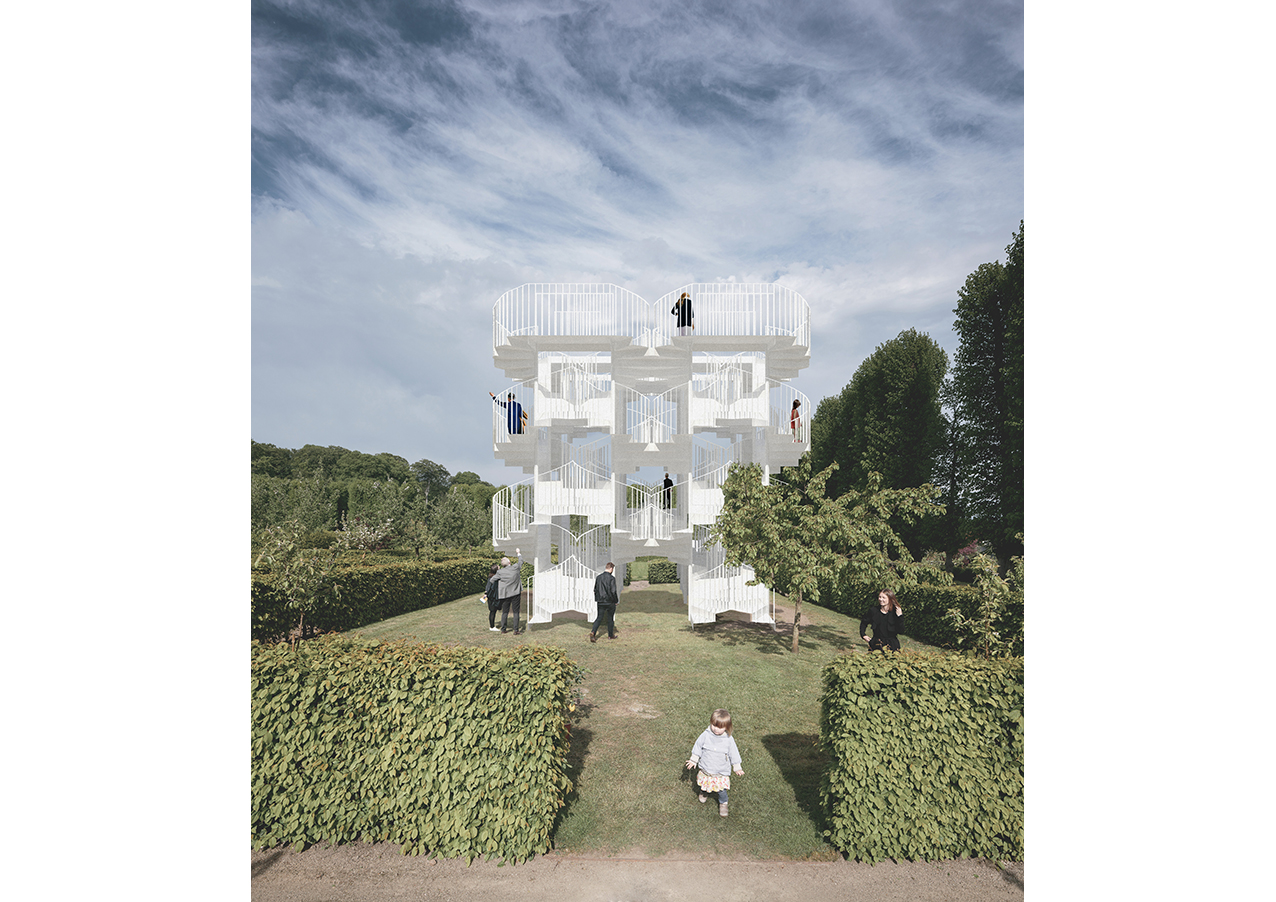 The Sceneri aims to interweave the history with our contemporary present: learning from histories to design a contemporary project. It aims to enter into interplay with the Baroque complex and its legacy, with the main building, the Orangeri pavilion from 2015 and the Moth House from 2016. It dialogues with the latter both in term of colour code with the Orangeri and material and modernist legacy of the steel with the other.

The proposal applies some key principles of the Baroque Architecture, specifically the theatre’s one, both in regard of the imagined space and the suggested experiences to the visitors.

Regarding the architecture the Sceneri refers to the Baroque obsessive geometry and symmetry; to the design of the landscape and its labyrinth; to the theatrical illusory use of perspective through the multiple backdrops; to the duality of the scene and audience and to the machinery of the backstage.

The obsessive geometry and the symmetry in the construction of the space refer to the baroque architecture as Rudolf Wittkower described it in his milestone. The strongest reference among the others is the Cappella della Sacra Sindone by Guarino Guarini where the repetition of the parts is able to build an unforeseen whole able to create a magic illusion of height developing with its plan an intricate drawing of thorough and balanced geometrical spaces.
In the same way the Sceneri use the geometry of the circle and the symmetry of the layout as its only rules: building a repetition of 16 winding staircases organised in a grid of 4 by 4 that touching and connecting each others build an uncountable number of paths and ways of experiencing the space.

The labyrinth, intended as part of the landscape design in the Baroque is different from the rational one of the Renaissance, is more romantic in its concept and challenge the believe of the visitors of the immediate understanding of its shape.
The Sceneri builds a simple geometry when seen from the exterior and a complex tridimensional labyrinth when explored from the interior.

In the Baroque the Illusion had a crucial role in the definition of the space: every time the audience was not able to imagine something then the Sceneri was in charge of representing the unforeseen, using the construction of the space and the perspective for inventing new dimensions of act. In this Ferdinando Galli da Bibiena (1657-1743), one of the master of the scenography, theorised scientifically the “perspectiva artificialis” inventing the multiple backdrops in a progressive smaller scale and the perspective drawn scenery to create the illusion of depth in the scene.
The Sceneri is able to play with the illusion of an infinite path to be explored by its visitors once inside but it looks charming and intriguing when seen from the outside where the change of the perspective behind the first line of staircase challenge the understanding of its space at first glance.

In the Baroque the spatial duality, with the binomial scenary and balcony, scene and audience, speakers and listeners was important to separate the reality from the illusion.
In the Sceneri this duality is amplified. The visitors going up and down and exploring the labyrinth in its tridimensional depth are both the actors on a scene, moving in the illusionary and perspective space of the Sceneri located in the Gl. Holtegaards barokhave; but they are also the audience that aim to explore the reality of the internal architecture of the Sceneri challenging the infinite combinations of paths and balconies from which the barokhave could be seen. In addition to that this very small quiet intimate space from which admire the barokhave recall the introduction of the private balconies in the Baroque theatre from which it was possible watch a public event while seating in a very private space.

Last reference is for the temporary theatre built open air in the Baroque garden, small jewels of fantasy, where for the small size the scenery, the scene and the machinery were overlapped in a balanced architecture which outcome was the spectacularization of the play. The Baroque saw also the publication of the book “About building Sceneri and machinery in theatre” by Nicola Sabbatini (1638) where it’s seen how all the illusion and the intrigue of the Scenery are based on wheels and mechanisms behind the scenes.
In the Sceneri the stairs and its complex dynamic internal mechanisms are balanced and concealed behind a quiet, static and peaceful exterior.

Some of these above mentioned principles could be recognised also in more contemporary moment of amusement and escaping from reality using our tablets or smartphones. In one of the episode of the famous TV series “House of Cards” Francis Underwood to relax from the everyday stress used to play a puzzle game “Monument Valley” where Ida, a princess, is challenged to walk into impossible geometries and stairs that recall the Maurits Cornelis Escher and Giovanni Battista Piranesi drawings. This game is one of the most sold game in 2016 for adults, more than children, prompting the experience of a tridimensional labyrinth as the only rule. The illusion by the game using the virtual reality could be considered as the contemporary way of addressing the Baroque concept of fantasy and imaginary using technology; our proposal for the Sceneri addresses this topic using the real experience as the most effective booster.