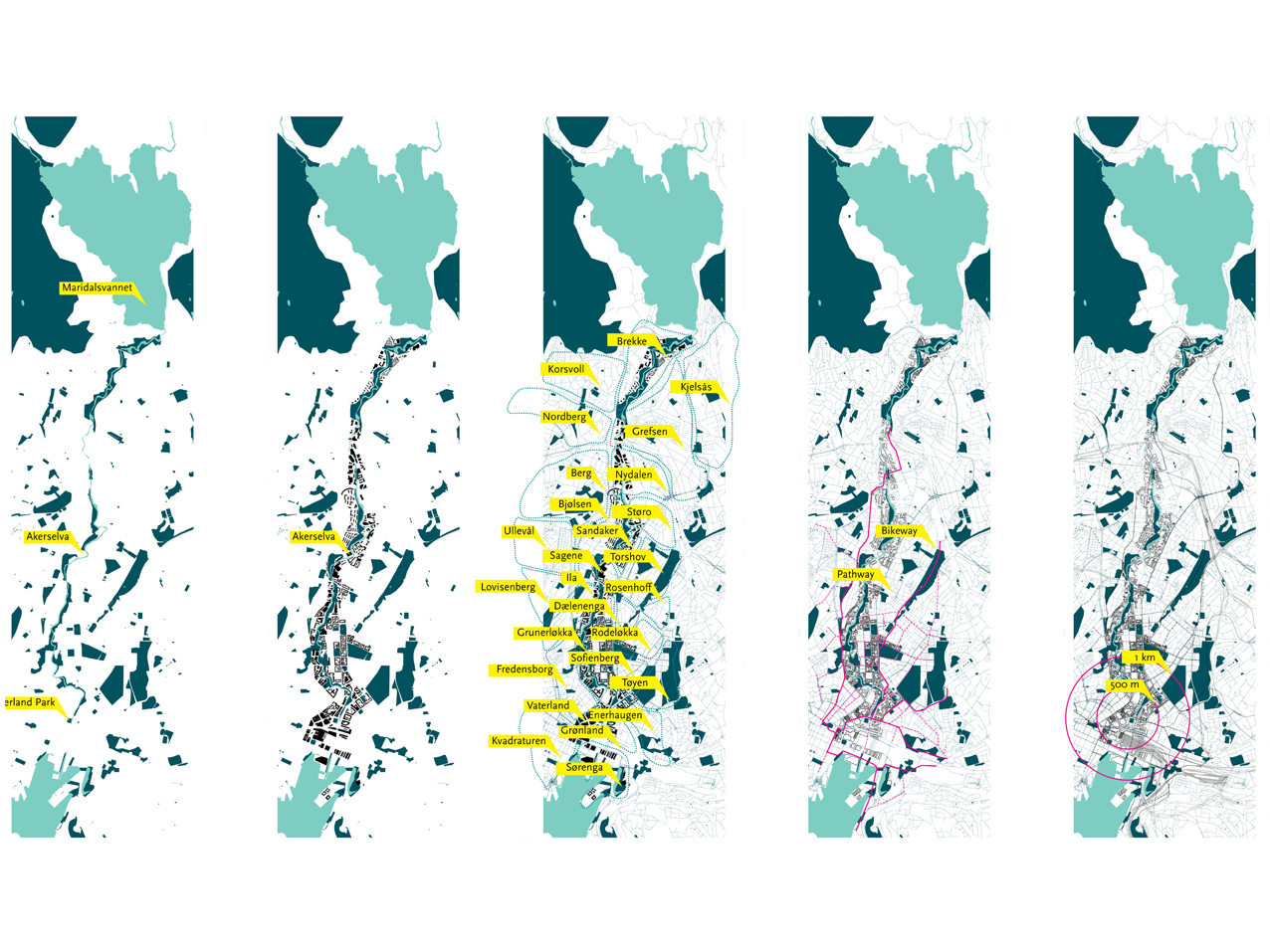 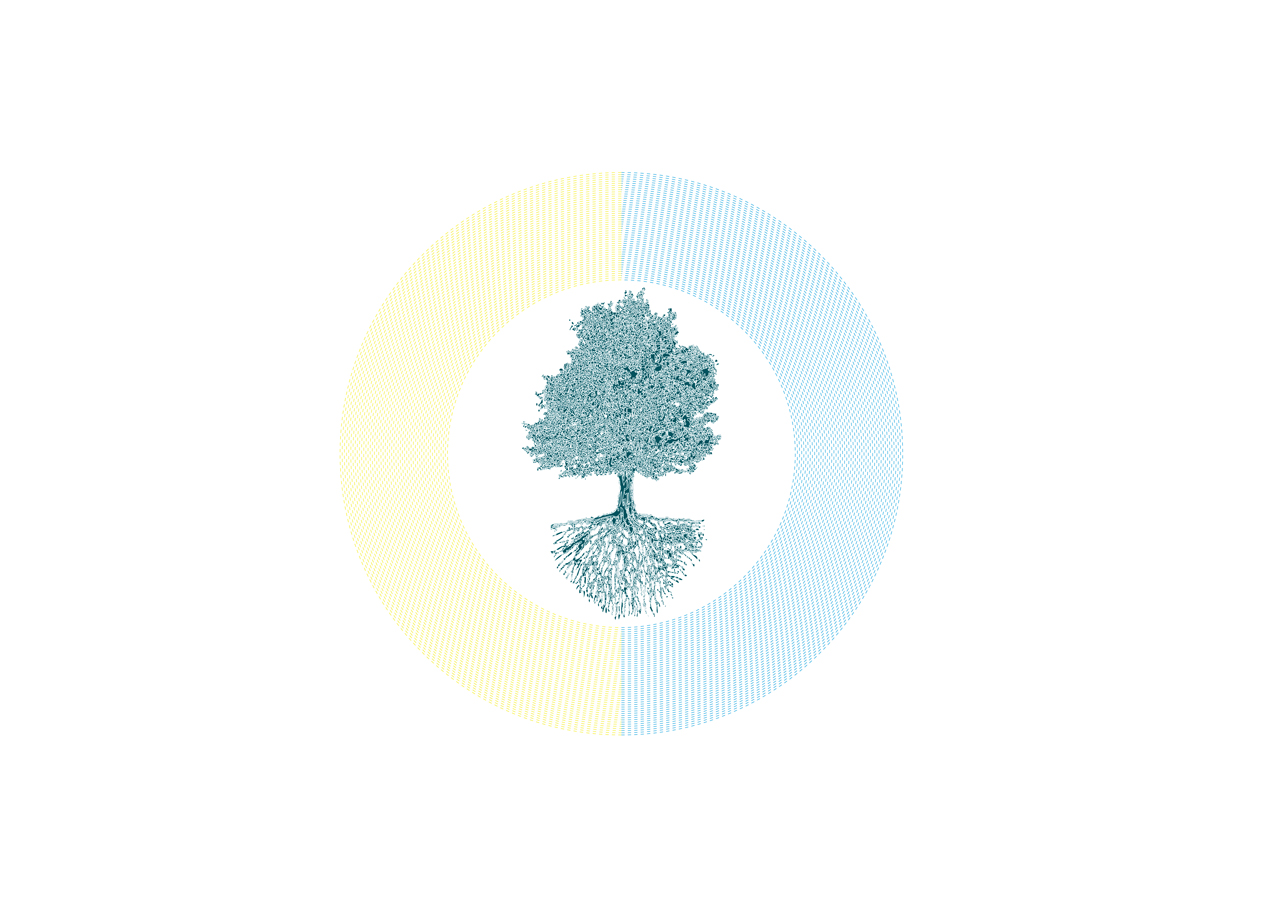 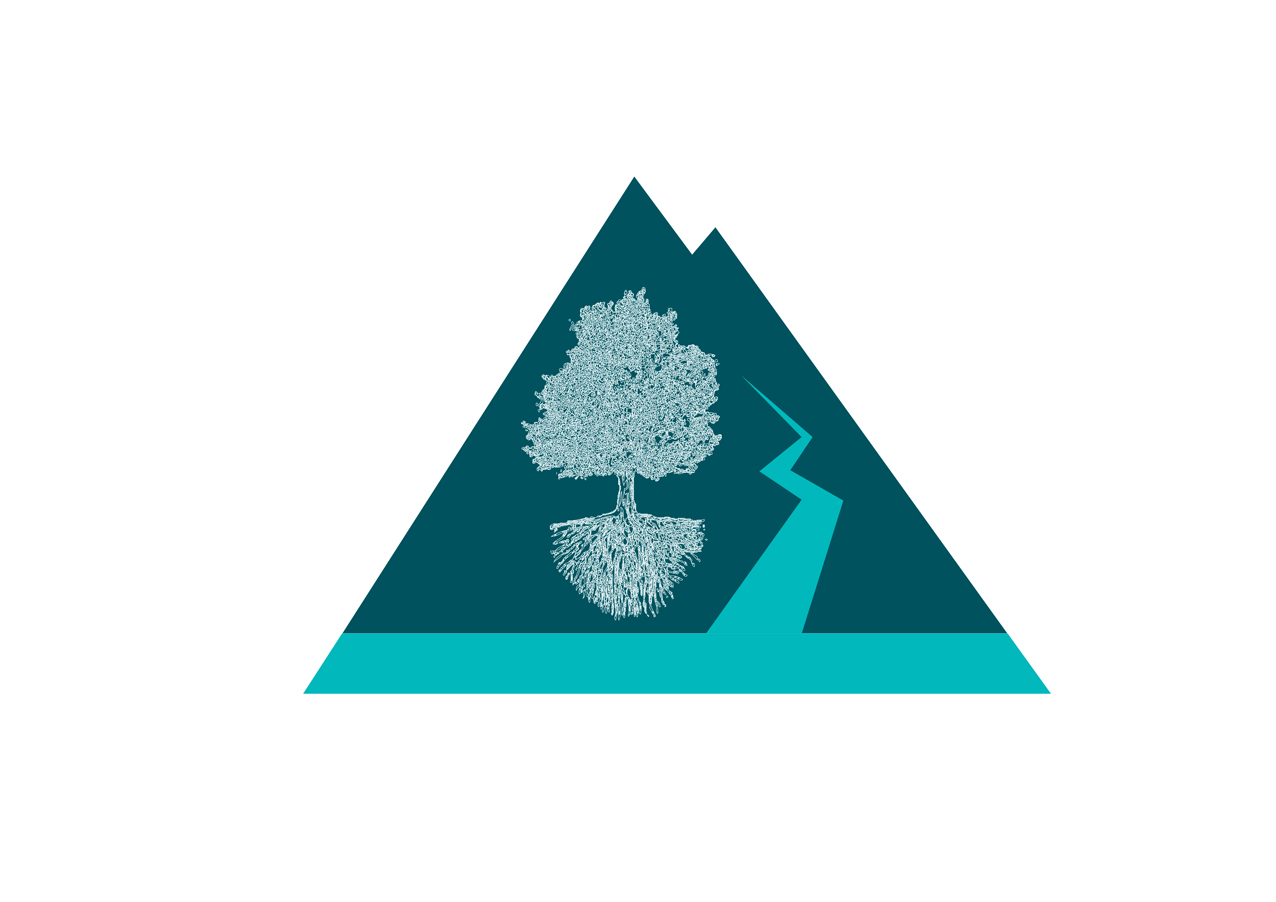 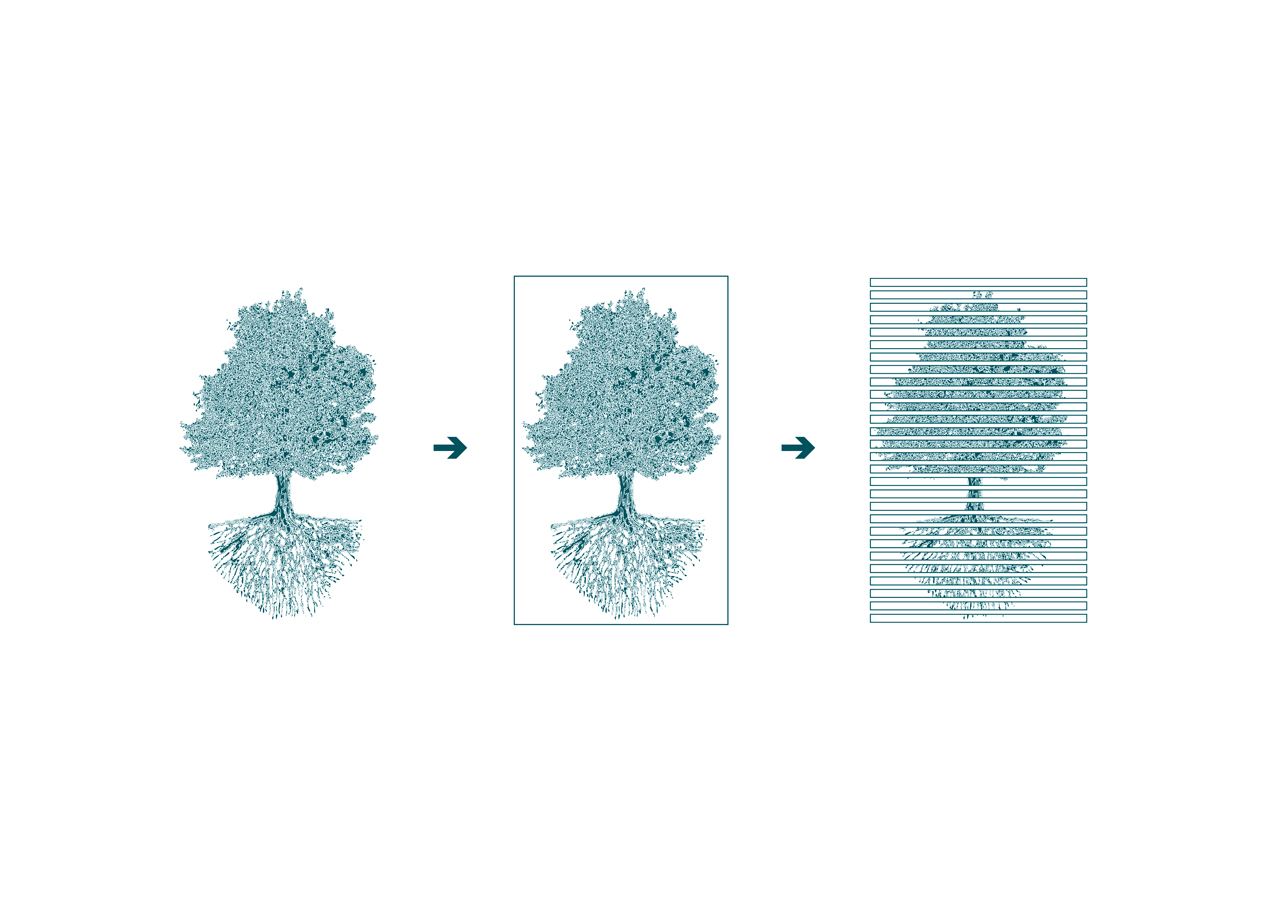 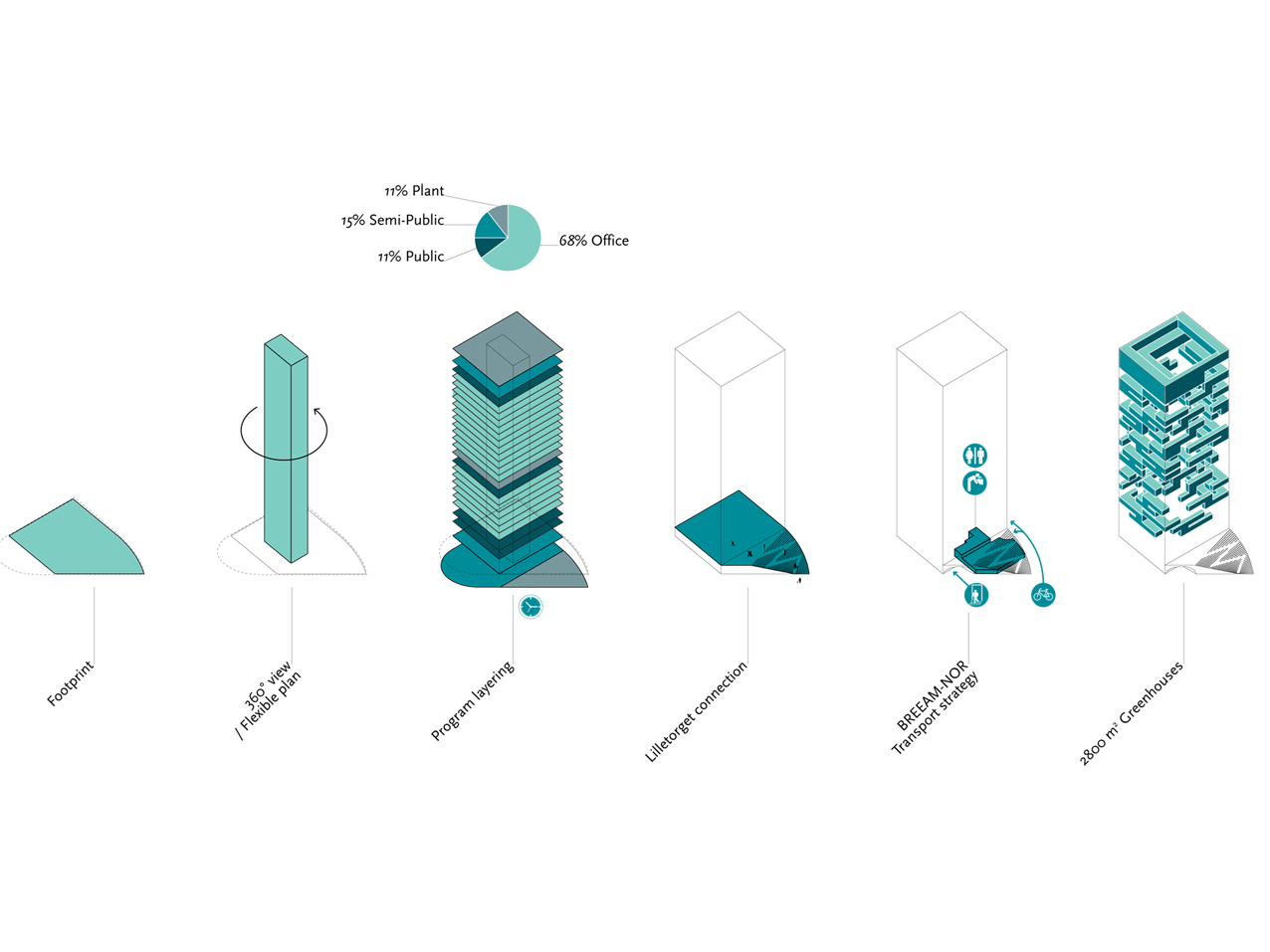 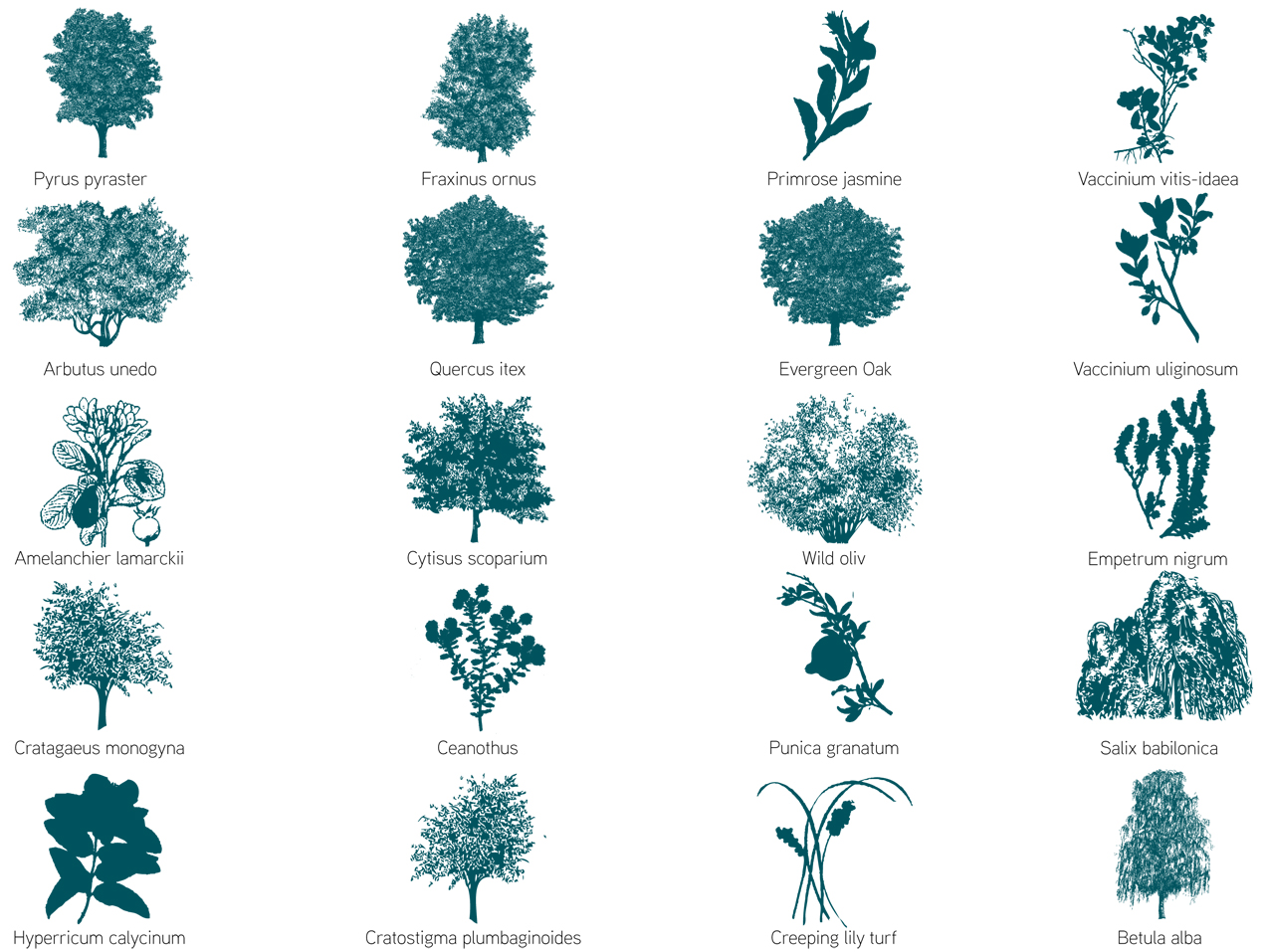 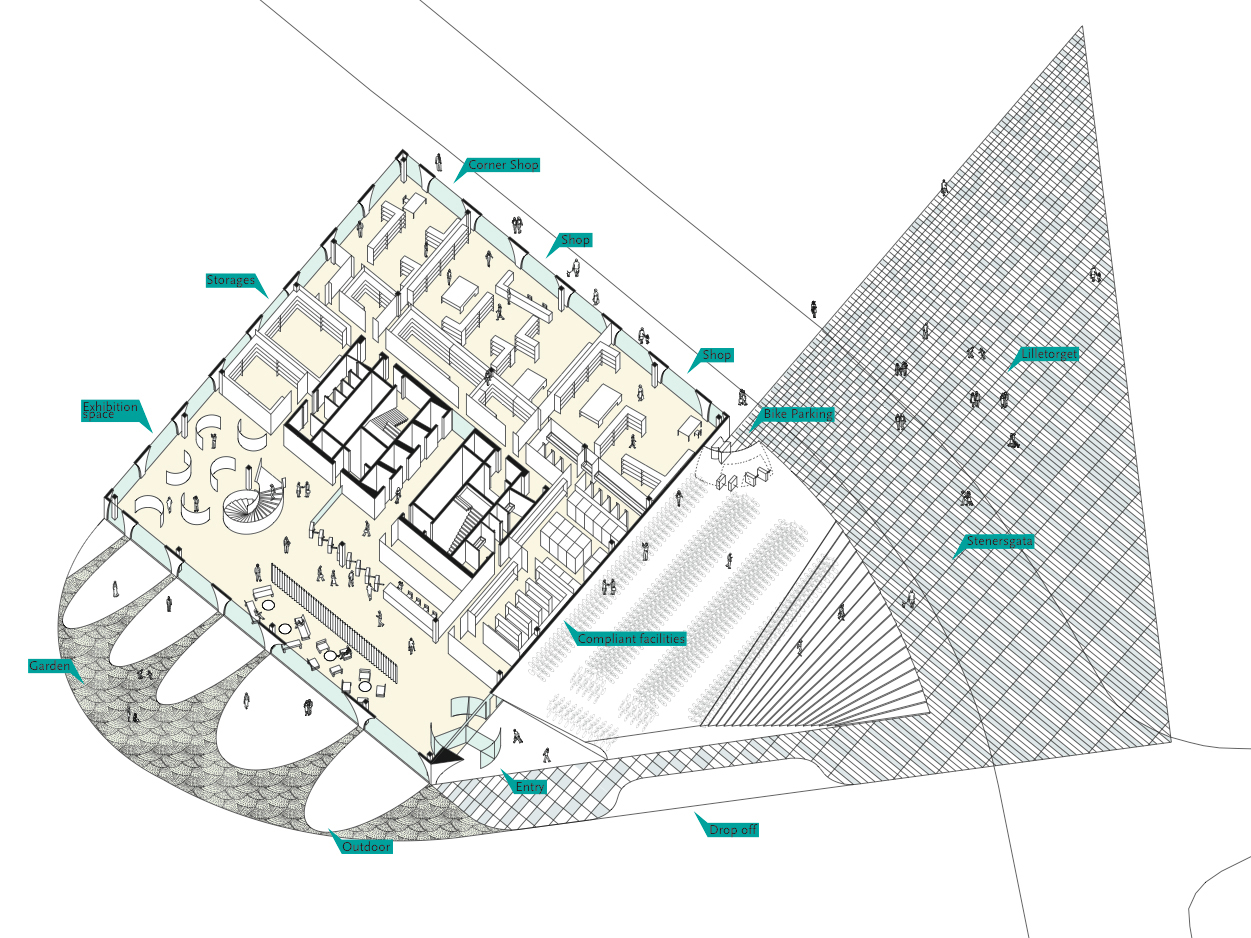 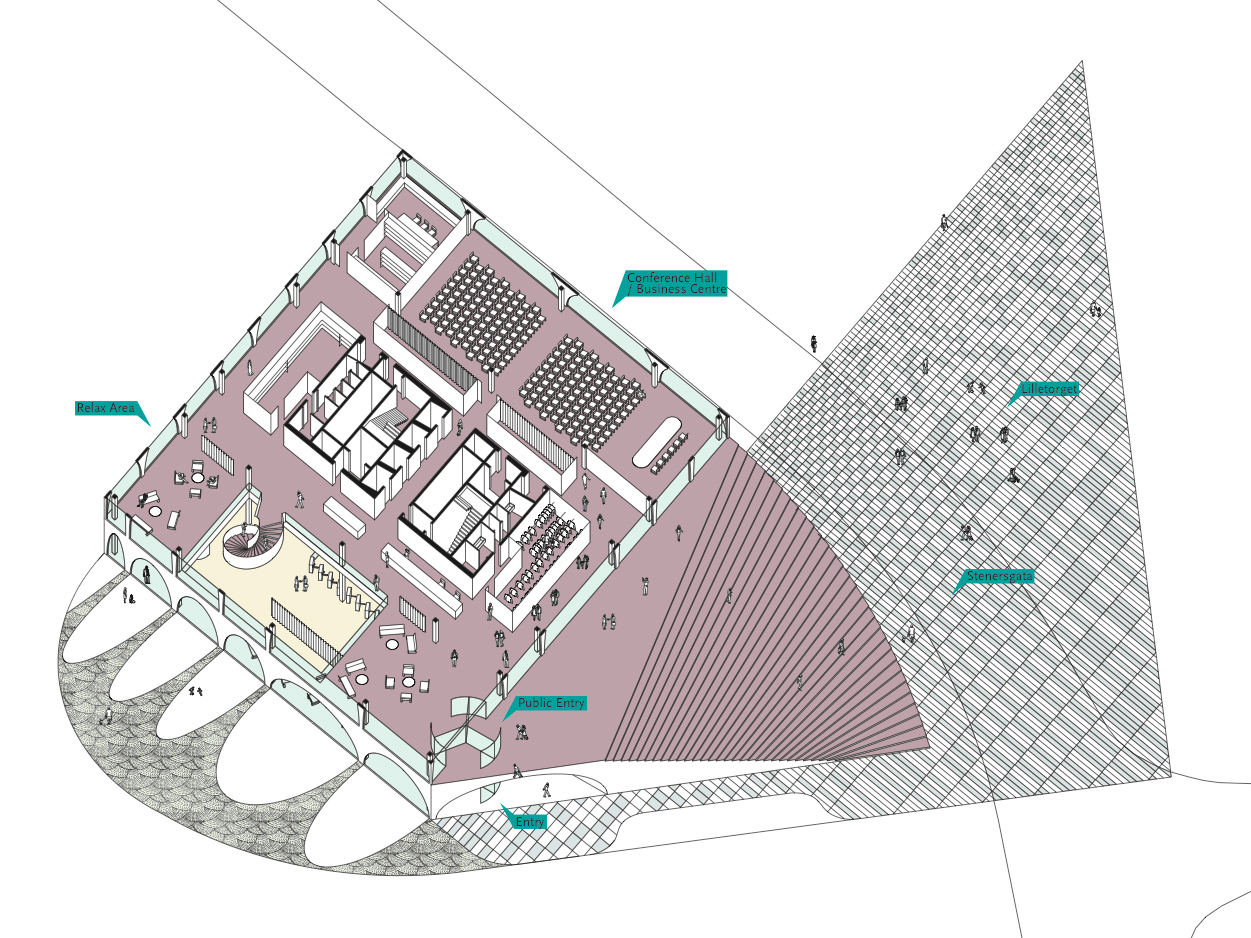 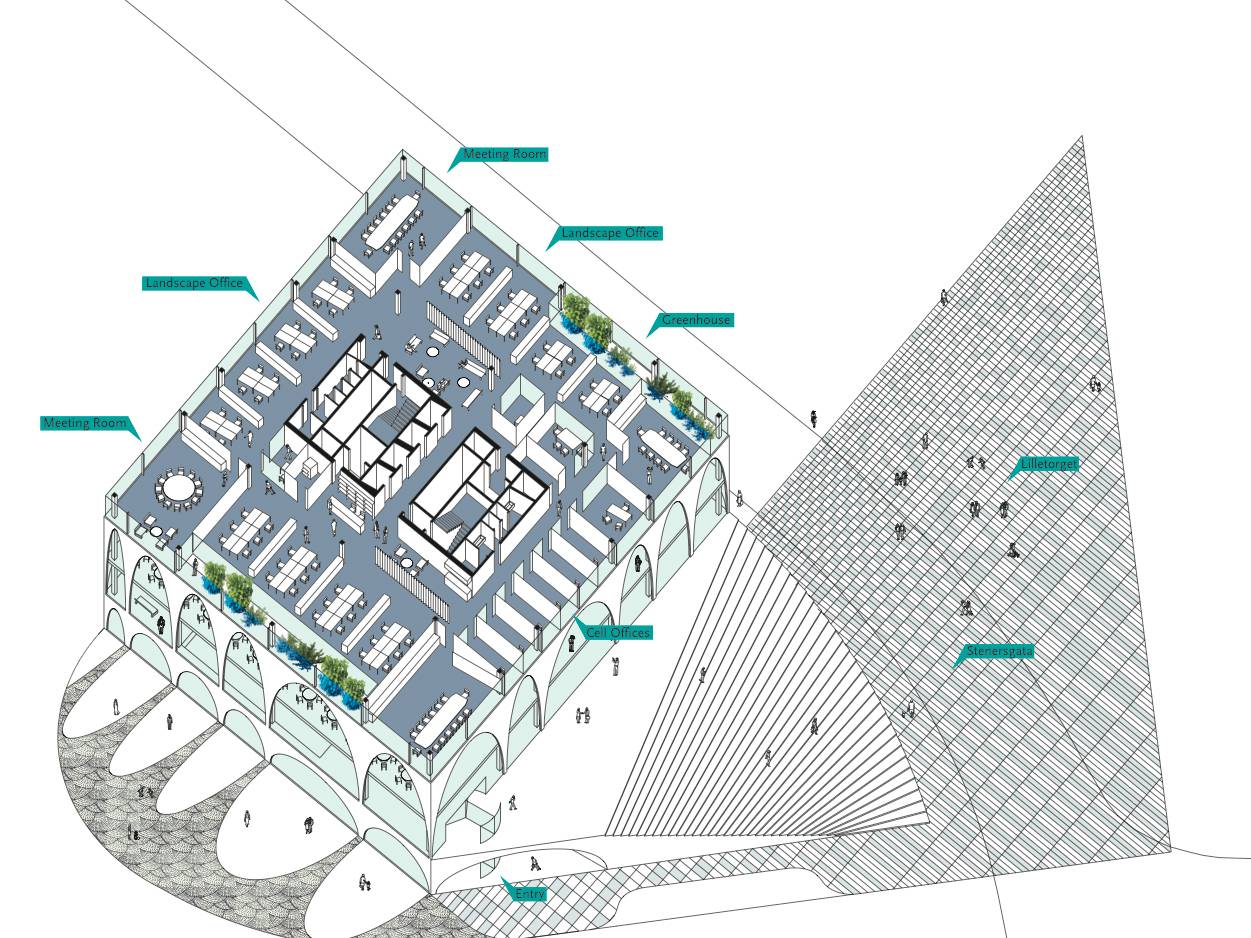 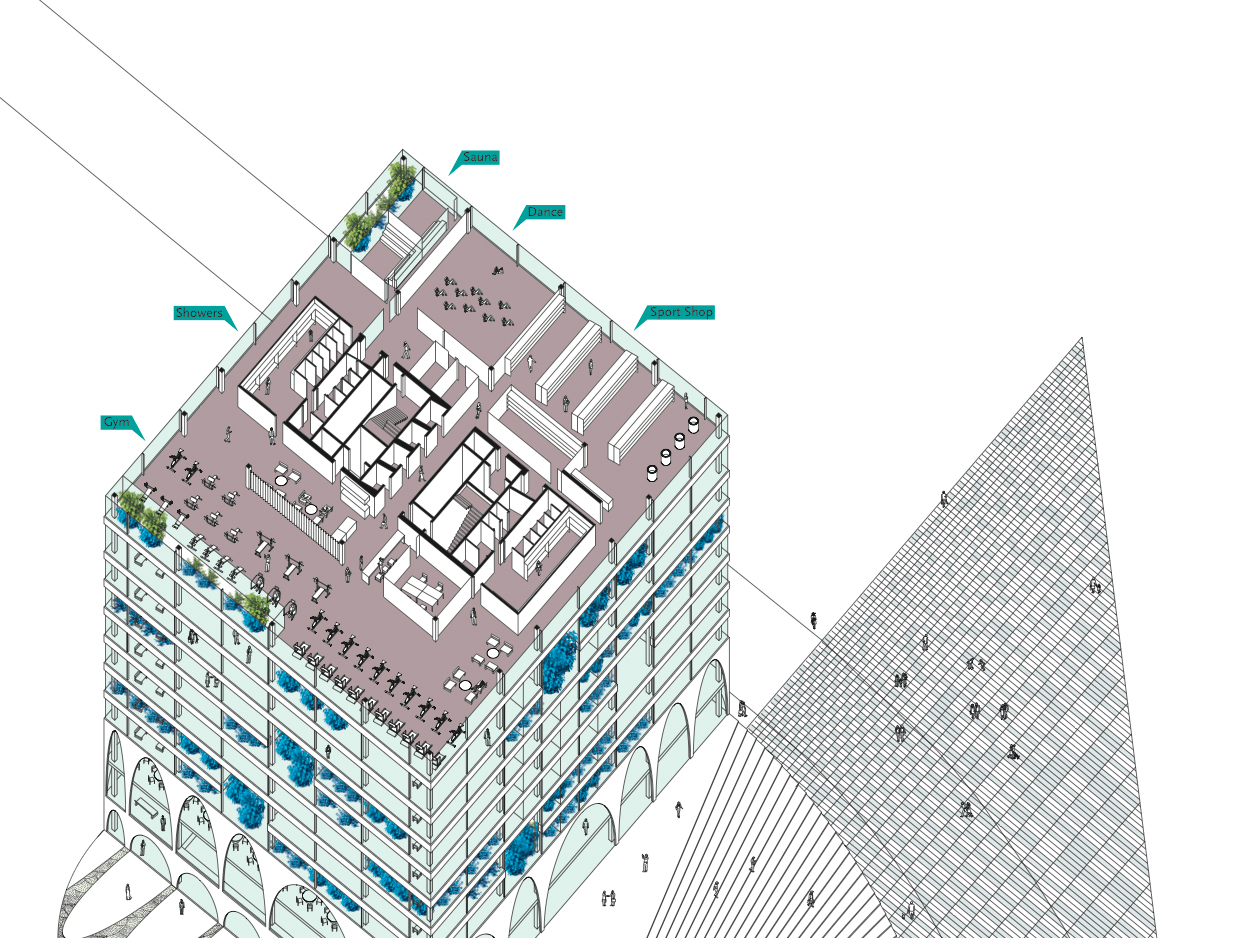 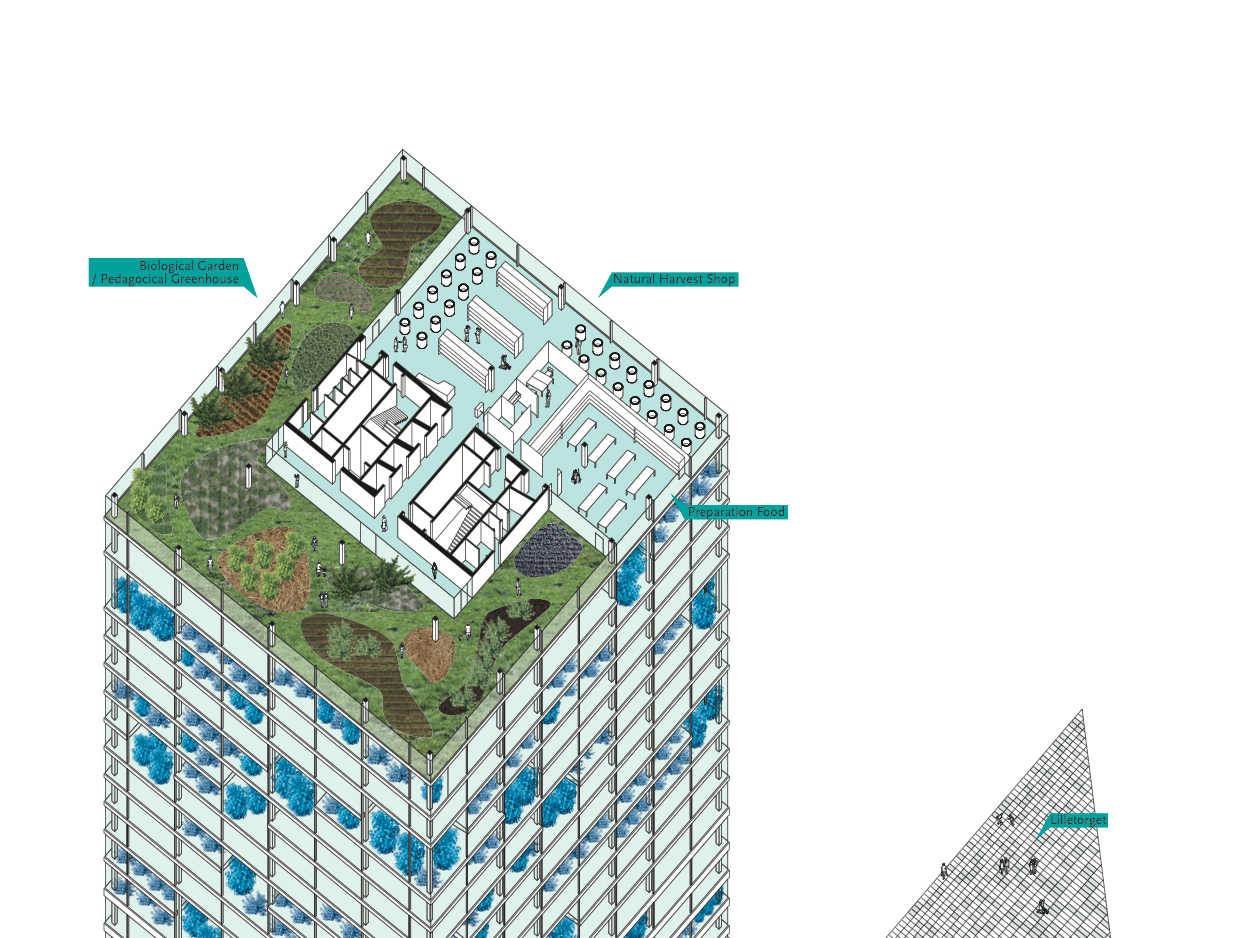 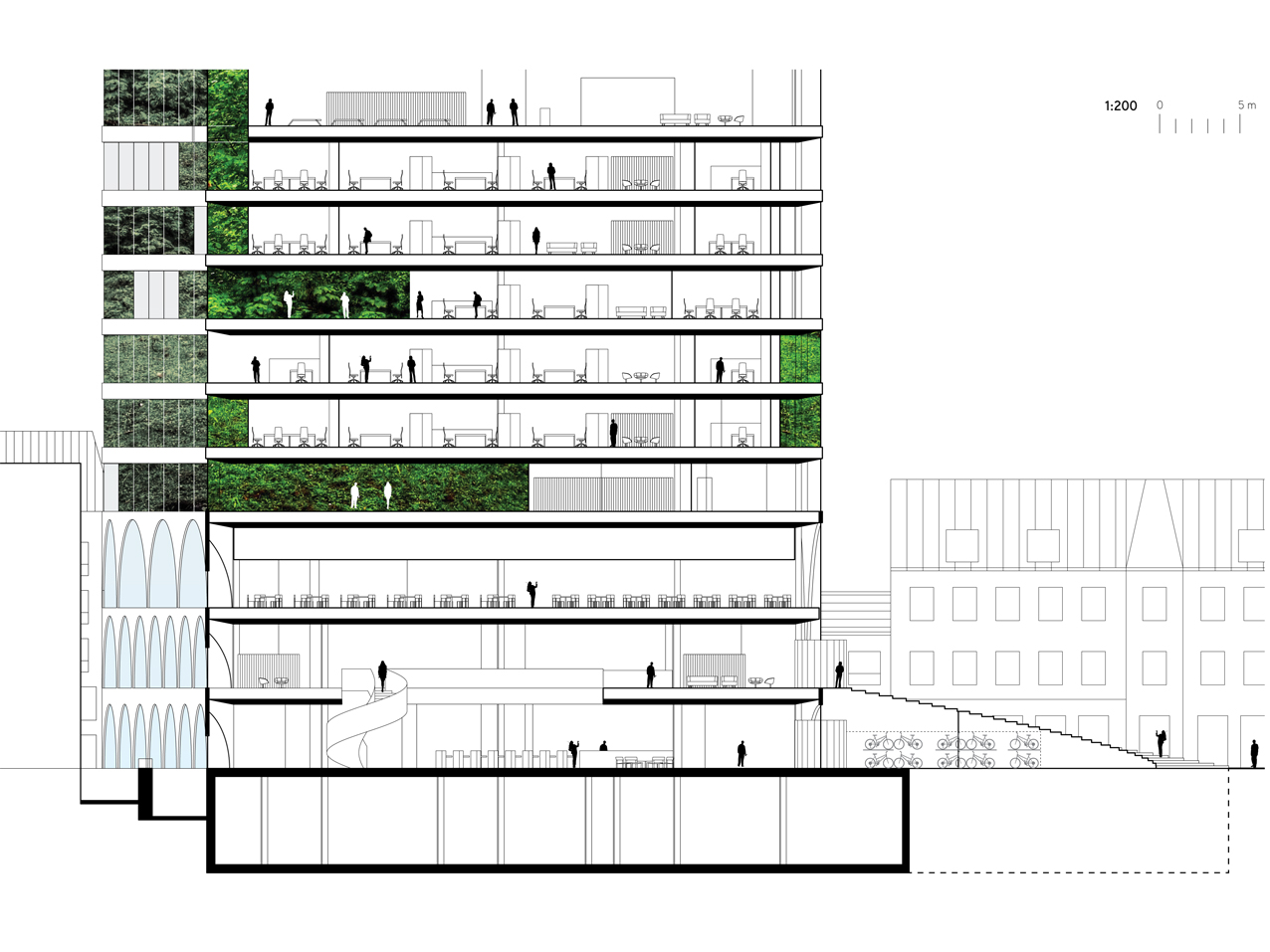 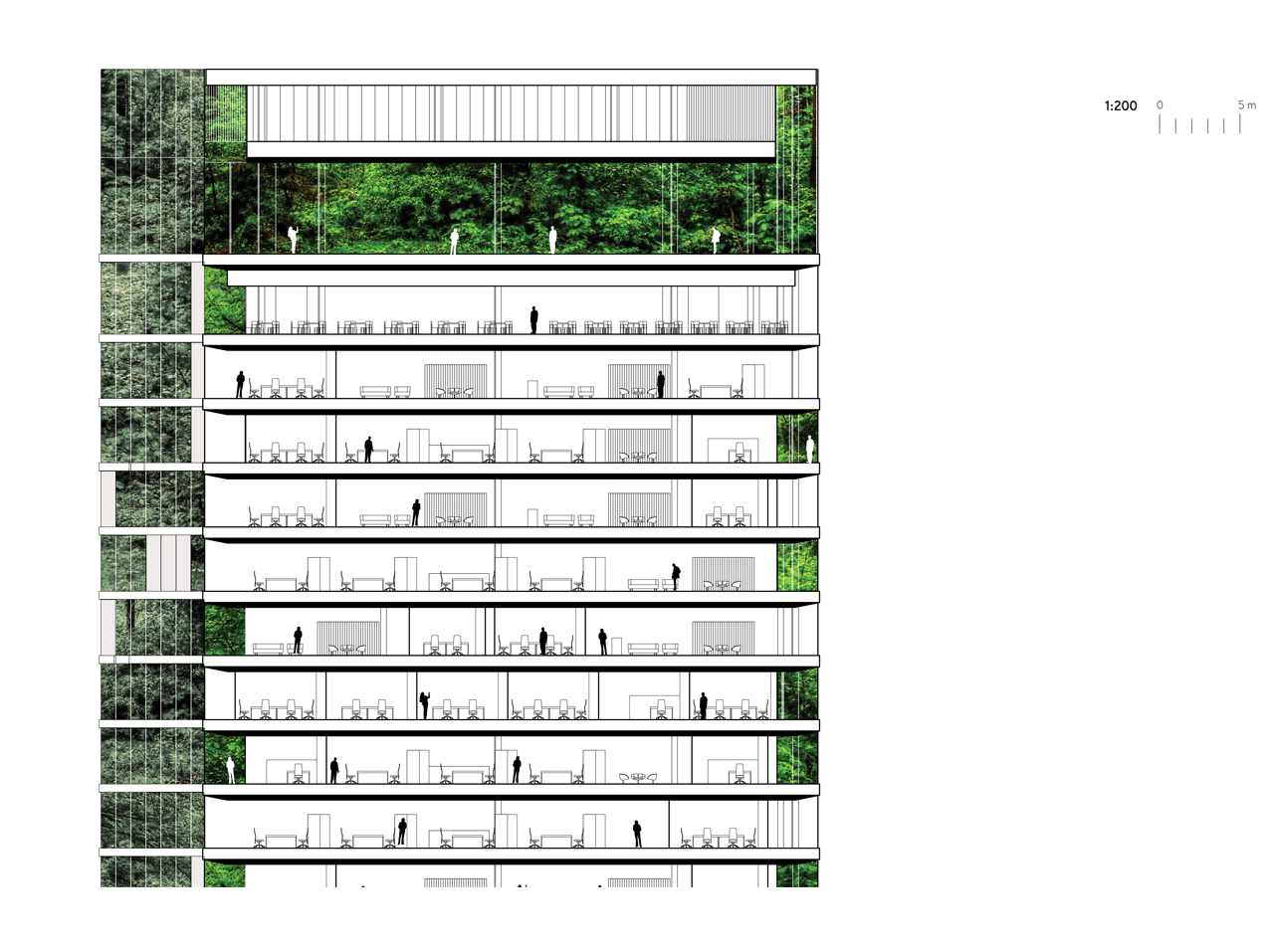 To face the challenge and deal with the several intentions and ambitions, we have outlined a vision that explain clearly our concept.
The Tree Tower, as the name suggests, finds its concept in the metaphor of making a building able to work like a Tree.
So first of all: how does the tree work?
Trees are the world’s tallest freestanding organisms. They have a design that allows them to soak up 1,400 liters of water every day, doing it against gravity.
The basic parts of the tree are the roots, trunk, and crown.
The Roots take up water and nutrients from the ground. They also anchor the tree into the soil.
The Trunk is the main distribution route, transporting water and nutrients from the roots and crown to the entire tree.
The Crown includes the large and small branches growing from the trunk. The crown grows thanks to sun irradiation, it’s a shading element and a cleaner for pollution and CO2.
Also the Tree Tower aims to be an organism dealing and learning from the nature how to work in the most efficient way in an equilibrium with the sorrounding. Its strenght is the life cycle process.

The Tree Tower in the relation with its sorrounding strenght its concept.
On a bigger scale the Tree is part of a Natural Landscape to which relate and to which interact.
The Tree Tower and the Vaterland park are together one of the Head of the Akerselva Green System, the biggest linear park of Oslo, that goes along the River Akerselva crossing the city.
The Tree Tower is strictly connecting with the Vaterland park that could be seen as its foot.
For both of them tools and devices of sustainable approach are proposed in order to deal with the main demands: phytoremediation, stormwater control, erosion control, pollution control and cleaning of the water,..

The Tree Tower has some key features:
- it’s a landmark, a symbol and an icon of efficiency and sustainable approach;
- it’s a dense building. A lot of volume is depending on a small surface, answering to the land consuming and to the efficience need of exploiting the most the building cost and construction;
- it refers to a strong community identity cousciousness, both in the sustainable approach that looks to the current and future generation but also because is able to offer a new experience to the people: shifting the public space in height and creating a park of 2800 m2 made of 30 different species of plants spotted in the greenhouses ensuring a robust indoor biodiversity;
- as a tree is made from the overlapping of several layers, also the Tower tree is an overlapping of indipendent functions, able to create a competitive mix and gradient of publicness;
- the greenhouses are visible from far away being on the different level and using as a principle the one of having the smallest volume with the biggest surface: only the 5% of the floor plate is invested in this sustainable fuction
Other trasversal features that build up the vision are the strong food production and the people-centered principles.

In the basement the production of energy is located in order to distribute the energy up to the several levels of the Tree and also to its sorrounding.
Its trunk, the core, contains the pipelines for the distributions of the heat and energy supply and also the lift to move along the Tree body.
The crown of the Tree is a system composed by 70 greenhouses that have a key role in the Eco-efficiency vision:

- they create a buffer and protect from cold temperature during winter;
- they keep the sun and the irradiation thanks to the greenhouse-effect and actively contribute to the food production strategy of the Tree;
- they clean the air from the CO2 produced in the office floors by the people working there and release O2 in the air;

Their role is easily assimilate to the Photosynthesis. To make food, The Tower tree need CO2, water and sunlight. Through this process, the greenhouse capture light energy from the sun and, in the presence of chlorophyll, convert it into sugars with carbon dioxide absorbed from the air and water. The leaves of the plants contained in the greenhouses release oxygen in the process.

Another important process in the Tower Tree is the circulation of liquid. A system of harvesting rainwater collect the water in a tank located in the top floor and than from the top floor use the gravity to make the water circulate in the pipelines for the use that could be possible without depurating the rainwater. The greenhouse irrigation system for instance is one of those.

To conclude the Tree Tower is a Tree of 25-storeys.
It’s built in direct connection between the earth and the sky. A direct contact with the primary element: the water from the sky, the earth from the roots and the energy supply, the light for the food production and the wind to breath using the hollow core ceiling as thermal mass during the summer night.

In collaboration with ARUP, London.